Alumni of the Jordan College of Agricultural Sciences and Technology at Fresno State are raising money to support students in honor of Ben From, one of the region’s most influential agricultural educators

From joined the faculty after teaching ag mechanics at Parlier and Fowler High Schools from 1954-1968. He spent 24 years at Fresno State training many of the region’s most well-known agricultural leaders including Leo 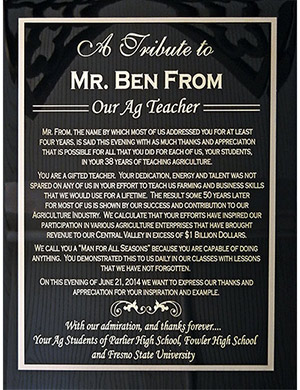 Since June more than $12,000 has been raised in From’s name. Alcidia Freitas Gomes, senior director of development for the Jordan College, expects the fund to grow as word spreads about the effort. “From made a lasting impact on the lives of countless students and this effort is such a fitting way to celebrate his contributions by benefiting the next generation of leaders in agriculture.”

Former student Ken Bedrosian, co-founder of the National Raisin Company in Fowler, teamed up with others who were influenced by From to host an honorary dinner on his behalf, June 21 in Fresno.  “He deserves this,”
Bedrosian said to the media at the event. “He has been such an important part of so many people’s lives.”

From retired from Fresno State in 1992. Now 86-years-old, From continues to operate a ranch in Fowler. He remains humble about the attention he is receiving from former students. “I am by no means the most outstanding teacher out there,” From said. “I did a reasonable good job and I was just in some very fortunate situations.”

For more information contact Shannon Fast, associate director of development for the Jordan College, at 559.278.4266 or sfast@csufresno.edu.