The President’s Medal of Distinction is the highest non-degree award presented by Fresno State. It is given to citizens of the region, state or nation whose contributions in the area of professional achievements or public service are of national or international significance.

Rodriguez, the ninth of 12 children, served four years as an Air Force code specialist in the Korean War. He attended Fresno State on the GI Bill, graduating in 1959 with a bachelor’s degree in po 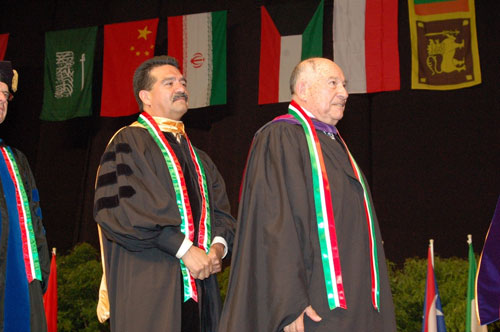 litical science. He earned his law degree from the Lincoln School of Law in San Francisco, and established the first California Rural Legal Assistance program in California.

In 1972 Rodriguez became the first Hispanic elected to the Fresno County Board of Supervisors of Fresno County. He was appointed by Gov. Jerry Brown to be a Fresno County Superior Court judge in 1975.

Rodriguez retired in 1996, but continued to serve on assignment covering court vacancies throughout the state. Known as an icon in the local Latino community, Rodriguez has a long history of service working in leadership roles with Arte Americas, Fresno State Alumni Association, Radio Bilingüe, Fresno County Community Hospital, Fresno-Torreon Sister-City Committee and other community organizations. In 2011 he was presented the Outstanding Alumnus Award by the Fresno State Alumni Association on behalf of the College of Social Sciences.

He and his wife, Betty, have each been recipients of La Medalla Ohtli, the highest recognition that the Mexican government bestows on non-Mexican citizens. The Rodriguezes have received numerous honors for their work with the Mexican Consulate, with Fresno’s Sister City Torreon and with youth from Mexico.