As the California State University system celebrates its Class of 3 Million Campaign this Commencement season, Fresno State plays its part with two days of events that begin at 8 a.m. Friday, May 15. The big show – the 104th Fresno State Commencement Ceremony – takes center stage at 9:30 a.m. Saturday, May 16 at the Save Mart Center. Doors open at 8 a.m.

About 5,136 Fresno State students are eligible for degree conferral by President Joseph I. Castro, who will be joined by Framroze Virjee, executive vice chancellor and general counsel for the CSU Board of Trustees.

Moses Menchaca, president of the Associated Students, Incorporated will open the free, public ceremony, to complete his second term.

The Class of 2015 Commencement season kicked off May 6 with the Nursing Master’s Hooding Ceremony. It continued last week with recognition celebrations for Educational Opportunity Program and Asian American and Pacific Islander students.

The events resume Friday with 23 college and school convocations in addition to department and program celebrations throughout the day at multiple locations. On Saturday after the Commencement, another five events will be held before concluding Sunday morning with the Nursing Graduate Pinning Ceremony at 10 a.m. at the Satellite Student Union.

Of the 32 events, 29 are on campus, mostly in the Save Mart Center, the adjacent Student Recreation Center or the Satellite Student Union. The three events off campus will be at Woodward Park Rotary Amphitheater and Clovis Veterans Memorial District.

Some of the ceremonies require tickets based on the size of the graduating class and anticipated audience. Those events are noted on the schedule. Live streaming will not be available but video will be posted to Fresno State YouTube page the week after Commencement.

Students and families are encouraged to tag their photos posted to social media by using the hashtag #FresnoStateGrad15 and #CSU3MIL for the CSU Class of 3 Million.

Students will also be presented a wristband commemorating the Class of 3 Million that was observed at all 23 campuses during the 2014-15 academic year.

With the graduation of the Class of 2015, CSU will surpass the milestone of having 3 million alumni who are invited to join an online yearbook.

Fresno State’s current Class of 2015 includes 4,105 students who completed requirements for their baccalaureate degree, 939 students who have earned master’s and education specialist degrees and 92 students who earned doctorate degrees.

Typically, about 1,300 students walk in the ceremony with many others opting to participate only in their respective college convocations or department/program celebrations.

At the main university ceremony Saturday morning the President’s Medalist and the University Graduate Medalist will be announced. These students are selected from among the 18 Dean’s Medalists representing the eight colleges/schools and the Student Affairs Division. 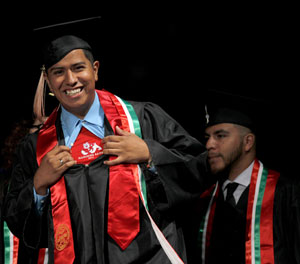 The announcement will be posted on the university’s Commencement website along with a photo gallery of the weekend’s activities. The two top students will also be featured on the marquee boards at the Save Mart Center and Bulldog Stadium (Cedar and Shaw).

Also Saturday morning, Castro will confer by authority of the CSU Board of Trustees the honorary degree Doctor of Laws on a Fresno State alumnus, the Hon. Marvin Baxter. An associate justice of the Supreme Court of California, Baxter is being recognized for his distinguished 49-year legal career.

Dr. Anil Shrestha, professor of Plant Science in the Jordan College of Agriculture Sciences and Technology, will receive the Provost’s Award for Excellence in Teaching from Dr. Lynnette Zelezny, provost and vice president for Academic Affairs.

H. Dan Smith will lead the procession as grand marshal as one of the university’s longest tenured faculty members. Smith, who joined Fresno State’s faculty in 1978, is a professor in the Department of Counselor Education and Rehabilitation.

Adam Stirrup, the president of the Fresno State Alumni Association, will welcome the Class of 2015 graduates as official alumni after the degree conferral.

The commencement ceremony is organized by the University Commencement Planning Committee, coordinated by the Division of Student Affairs under the guidance of staff in the Office of Student Activities and Leadership Development.

Parking will be free in the Save Mart Center lots for all commencement events on campus. Guests are encouraged to arrive early. For the University Commencement, students begin lining up at 8 a.m. at the loading dock on the east side of the arena. The procession starts at 9:30 a.m.

Guests with mobility concerns may be dropped off at the circle drive off Shaw Avenue adjacent to the Student Recreation Center (just west of the Save Mart Center).

Handicap parking lots: Lot 5 (directly behind Save Mart Center), and in Lots P1, P5 and P6.

Traffic: Freeway 168 westbound will be closed to vehicular traffic from Shepherd Avenue to McKinley Avenue from 7:30-9:30 a.m. Saturday, May 16 for the California Classic Century Ride. Please plan to use an alternate route and expect traffic delays. Plan to arrive early to avoid heavy traffic.