The Fresno State Bulldoggers Rodeo Club will host its only home competition of the season March 12-13 at the Clovis Rodeo Grounds (748 Rodeo Drive, Clovis).

Competition starts at 6 p.m. on Saturday and 1 p.m. on Sunday 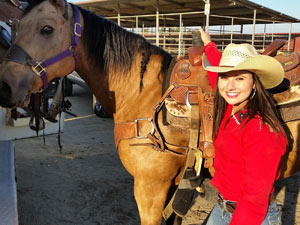 The Fresno State women’s and men’s teams are ranked second and fourth in the West Coast Region, respectively.

Freshman Brittany Dias of Hanford leads the region in the all-around category and ranks third in breakaway roping and goat tying.

Other Bulldoggers ranked in the top three in the region include sophomore Colton Campbell of Klamath Falls, Ore., in three categories (all-around, second; steer wrestling, second; team roping heeler, third); freshman Bodi Dodds of Sanger, who is third in team roping header; and senior Tegan Turner of Lemoore, who is third in barrel racing.

Cost for each session is $5 and free for Fresno State students with a student ID. More event information is available at www.facebook.com/Fresno-State-Rodeo-Team-Bulldoggers.

The Bulldoggers received a major boost in October with a gift from Central Valley Rodeo Inc. of more than $300,000 to be paid over the next five years. The Jordan College of Agricultural Sciences and Technology used part of the gift to hire Coach Tony Branquinho, as well as to pay for future equipment and facility improvements.