Alessio Bax will launch the 45th season of the Philip Lorenz Memorial Keyboard Concert Series at Fresno State. For 45 years, the series has brought some of the world’s most acclaimed pianists and organists to Fresno State for concert performances. The series opens at 8 p.m. Friday, Sept. 9, in the Concert Hall at Fresno State.

Bax won first prize in the 2000 Leeds International Piano Competition and was the recipient of the prestigious 2009 Avery Fisher Career Grant. The Italian-born Bax will perform works by Beethoven, Scribin and Mussorgsky. Bax replaces Joseph Moog, who had to cancel his American dates unexpectedly. 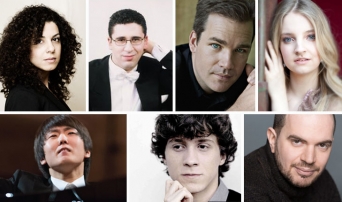 Tickets for concerts in the Keyboard Concert Series are $25 general, $18 for seniors and $5 for students. Season tickets are available for the eight main concerts: $160 general, $120 seniors and $30 students. Parking is available in Lot P1 (corner of Shaw and Maple avenues). For ticket reservations, please call 559.278.2337.