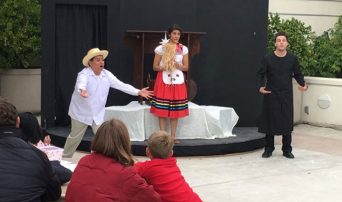 The free, public show, which also features the Fresno State Mariachi performing Christmas and traditional Mexican music, ends a four-week run and months of preparation that has taken the four-member cast to several Valley elementary schools, television shows and the Woodward Regional Park Library to perform before nearly 2,500 area schoolchildren.

The 45-minute production, based on a Mexican folk tale about the spirit of giving and the origin of the use of poinsettias at Christmastime, has been met with acclaim from youngsters and school officials where it was presented as part of a $10,000 grant awarded to the Fresno State Opera Theatre by the Central Valley Community Foundation. Part of the goal was to reach communities that would benefit from seeing original live opera theatre.

“We have never seen something like this — an opera performance — out here in Firebaugh, so it was a really nice experience for our kids,” said Lorena Escobedo, a fifth-grade teacher at A.E. Mills Intermediate. “Even some of the teachers had not been to an opera, and they really enjoyed it too. They were saying how kids were in awe. It was a real treat, we loved it.”

Dr. Anthony Radford, associate professor of voice and opera at Fresno State and the artistic director of opera theatre and the children’s opera, said the production “has been a great opportunity for my students to go out into the community and perform and also as a way to reach new audiences that hadn’t heard opera before.”

He commissioned composer Evan Mack and librettist Joshua McGuire to write the original opera for Fresno State so the opera students could perform for local children.

“I wanted to connect primarily with the students of the Central Valley, a very diverse community. When we do children’s opera, we do fairy tales based on European stories. But we searched for tales from this continent and came across this Mexican folktale,” Radford added. “This experience also provided the community in general a chance to learn about what we do with children’s opera at Fresno State.”

The bulk of the school performances were presented Nov. 16-18 at the Selma Arts Center where the Selma Unified School District transported 1,100 children from about six elementary schools.

“All of the students, and those of us who were privileged to attend, were extremely impressed by the Fresno State students’ talent, the opera theatre’s hard work in putting it together and providing an opportunity for the students to be interactive during the show — something these children will never forget,” Filgas said.

The troupe also performed Nov. 19 for 120 at the Woodward Park Regional Library; Nov. 30 for 550 at Edison Bethune Academy in southwest Fresno; and Dec. 1 for 600 at A.E. Mills Intermediate.

Escobedo, a 2011 graduate of Fresno State, said that it was also a great learning experience for the students in grades 3-5 at Mills because Radford provided lesson plans about opera for each grade level.

“So when the day arrived, they were ready with their poinsettias,” she said. “In studying it, some kids said they thought opera was strange, that it sounded funny but after they heard the live performance and went back to class, they were so excited and wanted to see it again. They were in awe when they got to meet the cast afterwards and gave the college students thank you cards they had prepared.”

While the opera Lucinda combines Mexican folk melodies with traditional Christmas carols sung by bilingual Fresno State students, the production is mostly sung in English with some Spanish.

Fresno State graduate voice and opera student Alejandra Tejeda, of Porterville, who also performs for the Fresno State Mariachi in the Music Department, sings the lead role of Lucinda. 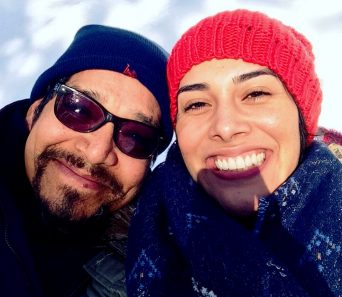 Alejandra with her father Armando Tejeda who was an influence on her musical skills early on.

Tejeda, whose own influences came early as a child when she would imitate her father singing mariachi songs and teaching her how to sing opera songs, said the experience of performing before children was different and even “scary” at first.

“It is different performing for children,” said Tejeda, who is 26. “You have the thought lingering in the back of your head that ‘kids are honest and if they don’t like it, they’ll let you know,’ so it was scary at first because I’ve gotten so used to performing for adults. As the days finally arrived to perform ‘Lucinda,’ I found peace in my heart knowing that this will impact the children in hopefully a good way as it did me when I was growing up.” 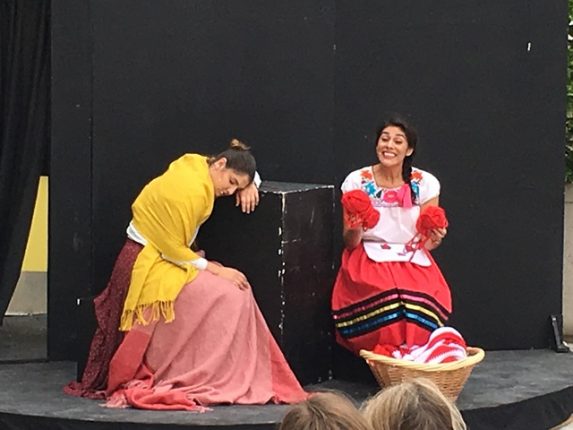