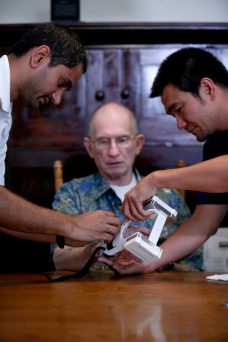 Fresno State mechanical engineering professor Dr. The “Leo” Nguyen and a graduate student are in the final stages of developing tremor-suppression technology to assist Parkinson’s and essential tremor patients with day-to-day tasks and improve their quality of life while limiting the need for heavy doses of medication or medical procedures.

As featured in the fall/winter issue of Fresno State Magazine, a University publication for alumni and friends, the Tremelo tremor-suppression device uses the principle of energy absorption — normally found to steady planes, bridges and tall buildings — to counteract involuntary shaking in the hand or arm.

New California Ventures LLC, a wholly-owned subsidiary of the Fresno State Foundation, provided early seed money and a significant capital investment to Nguyen to conduct research and develop a prototype device through Five Microns, a medical-device company he started. This allowed Nguyen to complete the patent application process, conduct further research and develop and test his prototypes.

The Parkinson’s Foundation estimates that 930,000 people in the United States will be living with the disease by 2020, while studies estimate that 7 million Americans currently live with essential tremor.

In 2012, Nguyen came to Central California to teach in the Lyles College of Engineering at Fresno State, where he continued to see and meet people with Parkinson’s. The region is known to have one of the highest rates of Parkinson’s disease in the nation.

The Tremelo device is scheduled to hit the market in 2019, and the Five Microns team is working on additional devices using the same vibration-control concept to address the range of tremors that exist — some being in the arm and hands, others only in the fingers. The device does not run on batteries and it does not deliver electric shocks.

For Winston Field, who is participating in trial studies for the tremor-suppression technology, Parkinson’s has slowly taken away his ability to use his right hand for tasks like drawing a straight line and using a spoon. He takes two pills five times a day to suppress the shaking.

Options for treating involuntary tremors have varying effects, and can include medication, brain stimulation surgery or exercise.

There are other hand-tremor devices in the research and testing stages, but none that use the energy absorption concept that makes the Tremelo family of devices unique, Nguyen says.

Nguyen and Rudraraju are working hard to finalize designs for the devices.

“We are doing our best to get the device to the users as soon as possible,” Nguyen says. “It will potentially help thousands of patients with severe tremors regain many activities of daily living to improve their quality of life. That’s the ultimate goal of this work.”

For more information about the Tremelo, or to learn how to participate in or support the project, visit www.fivemicrons.com or contact Conrad Kimball from Five Microns at conrad@fivemicrons.com or 559.216.7373.