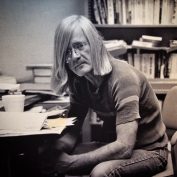 Dr. Martin Paul, a professor emeritus of English at Fresno State and a self-taught specialist on poetry in translation, died in Sarasota, Florida on April 1 at the age of 82.

An intrepid world traveler who visited more than 140 countries and learned five languages, Dr. Paul taught English literature and writing at the University from 1967 to 2006.

Dr. Honora Chapman, associate dean of the College of Arts and Humanities at Fresno State, said Dr. Paul provided his students “a true global perspective” by educating them in the theory and practice of translating literature.

“Both undergraduates and graduate students benefited from his humane approach toward making literature from Latin America, in particular, accessible to readers of English,” Chapman said. “Martin helped pave the way toward further diversification of the English curriculum and the worldview of students.”

Dr. Kathleen Godfrey, chair of the Department of English, agreed.

“Martin was a respected professor whose wide-ranging travels exposed Fresno State students to literature from all over the world,” Godfrey said. “For years, Marty taught our poetry in translation class, which fostered sensitivity to the nuances of language and revealed to students the complexities of translation.”

Dr. Paul learned to write and translate poetry early in his career as a professor at Fresno State, according to his son, Joshua Paul. He said his dad’s greatest support came from two faculty colleagues who were nationally renowned poetry specialists: Philip Levine from the Department of English, and Dr. José A. Elgorriaga from the Department of Modern and Classical Languages and Literatures.

“I remember he translated a Spanish poem that that Phil really highly approved of,” Joshua Paul said, “and that made him feel really validated as a poet.” Levine would later win a Pulitzer Prize for poetry and become U.S. Poet Laureate.

Joshua Paul said it was Dr. Paul’s translation work with Elgorriaga, who was also Fresno State’s men’s soccer coach, that brought his dad to the brink of publishing his first book of poetry in the early 1980s — but it never happened.

They worked together seven years on a book of translations from the works of Rafael Alberti, a Spanish poet considered one of the greatest literary figures of the Spanish Civil War. According to Joshua Paul, a publisher in San Francisco published the book with his own name on it.

“He was devastated,” Joshua Paul said. “All the nights with Elgorriaga at the house, at the library — after the fact, it took him years to put it behind him. At one point, he didn’t talk about it. He continued to write, but didn’t need the validation to publish.”

His daughter, Katharine Clatt, said losing the book of poetry translations was one of only two times she remembered her father crying. The other? The death of John Lennon, the great musician and peace activist.

Clatt remembers reading books with her dad from an early age, especially when he took her and brothers Joshua and Jason on travel adventures around the world. She said they read the books of the countries they traveled in — throughout Central and South America, Europe, North and West Africa.

“It was more than the Spanish translations,” Clatt said. “He taught us that where you came from had nothing to do with what you could learn. He knew his life was bigger than Fresno, and he always took us there. He was always trying to make people better than they were.”

Joshua Paul said his dad, while on sabbatical in 1975-76, drove alone in a used Volkswagen van — which he’d freshly purchased from Levine — down to Panama, adventuring through Central America. On his way back, in February 1976, Dr. Paul was caught in the massive 7.5 magnitude earthquake that struck Guatemala, which devastated swaths of the country, killing more than 23,000 people and injuring 75,000 more.

Joshua Paul said his dad many times recounted the story of being shaken awake in the van while in Antigua, Guatemala. The van was rocking so wildly from side to side, Joshua Paul said, that Dr. Paul apparently first thought it was local kids he’d just met who were rocking the van as a joke in the wee hours of the morning. But when he witnessed one of the two huge cathedrals in the city’s plaza crumbling before his eyes, Dr. Paul realized what he had to do.

For six weeks, Dr. Paul volunteered his old VW van as a makeshift ambulance, transporting the injured to a nearby soccer field for help. His family back home, worried, lost touch with him during this time.

Born Martin Thomas Geblin on June 15, 1936, in Suffolk County, Massachusetts, Dr. Paul’s caring and adventurous worldview was shaped as an antidote to his earliest experiences, his daughter said.

His mother, an Irish immigrant, was forced to give him up for adoption, Clatt said. He lived in an orphanage, bounced between families, was put into Catholic school and was finally sent to a rural farm around age 8 to live with an older couple, the Pauls. Later, Dr. Paul described the farm as a child labor operation lacking love and affection.

But Dr. Paul learned his way out of the situation, reading books and earning straight A’s in school. He eventually won a full scholarship to the College of the Holy Cross in Worcester, Massachusetts, and later earned his Ph.D. from the University of Wisconsin-Madison.

Dr. Paul never looked back. He “cut the cords to his old life,” Joshua Paul said, and became a teacher. Clatt said the new life he built in Fresno, where he was proud to teach in the English Department, gave her dad “his friendships, his social society, his world. He loved working with students. He had a phenomenal life, teaching.

“He always said, if you have to say something, write it simple,” Clatt said. “Don’t try to puff it up with big language and words. That’s what he wanted, one great word. There’s nothing like one good sentence. He loved taking apart a sentence.”

There were no funeral services.

The family requests that in lieu of flowers, memorial tributes be made to the Fresno State English Department in honor of Dr. Paul, to benefit the Philip Levine Scholarship. Checks can be made to the Fresno State Foundation, with “Martin Paul” in the memo, and mailed to 2380 E. Keats Ave., M/S MB99, Fresno, CA 93740. For questions about donations, call the College of Arts and Humanities at 559.278.7082.