Fresno State’s eight schools and colleges, along with the Division of Student Affairs and Enrollment Management, each selected an outstanding student to honor as Undergraduate Deans’ Medalists for the class of 2019.

The deans selected an undergraduate and graduate medalist based on academic excellence, community involvement and other achievements. Fresno State’s Graduate Deans’ Medalists will be announced later this week.

At Fresno State’s 108th commencement on Saturday, May 18, one medalist from the group below will be announced as the President’s Medalist, the University’s top academic honor for an undergraduate student.

This year’s medalists are:

María Díaz, of Sanger, completed her B.S. in mathematics with a 3.93 GPA. She was born in Guadalajara, Mexico, where opportunities seemed unattainable and distant, she said. But her father, a rancher who delivered milk, envisioned more for her and moved the family to the United States where Díaz developed a passion for math and encourages others to love it, too. She served as president of the Fresno State Mathematics Club, for which she scheduled peer tutoring sessions and created fun activities to promote math. She helped young students develop math skills through Math Circle and Math Kangaroo programs and encouraged girls in middle and high school to pursue math through Fresno State’s annual Sonia Kovalevsky Day. Díaz also conducted research and presented at conferences nationwide. She plans to get her master’s degree and Ph.D. to become a math professor and help young female immigrants like herself. Her ultimate goal is to build a school in Guadalajara. 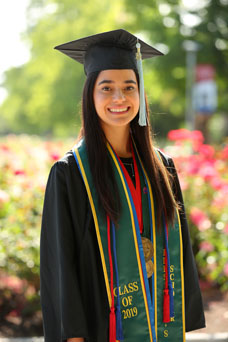 Kaylee Gutierrez, of Fresno, may be the first Fresno State graduate to complete her B.A. in liberal studies and multiple subject credential in only four years with a 4.0 GPA. She credits her family and degree adviser with supporting her through the programs, which typically take over five years to complete. The Smittcamp Family Honors College scholar wants to make an impact in children’s lives. She was a volunteer for Camp Kesem, assisting in raising money and planning a week-long free camp for children affected by a parent’s cancer. She co-authored the children’s book, “The Tree Tales,” which published in August, and spent time visiting elementary schools and conducting book readings to encourage students to read and write. Last December, Gutierrez signed an intent-to-hire agreement with the Fresno Unified School District. 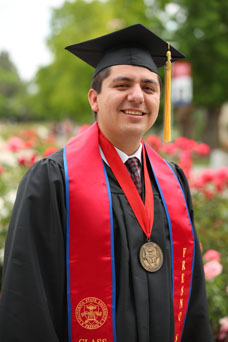 Cirenio Hisasaga, of Sanger, completed his B.S. in animal science and minor in Spanish with a 3.97 GPA. He spoke only Spanish until he started kindergarten and later decided to minor in it to hold onto his roots and to improve his Spanish-language communications. He became fascinated with animal science when he participated in the Future Farmers of America in high school. At Fresno State, Hisasaga worked in the Foster Farms Poultry Education and Research Facility, was a peer mentor for the Louis Stokes Alliance for Minority Participation, was a member of the Poultry Science Club and volunteered at the FFA Field Day poultry contest. He was in the Jordan College Honors Program and conducted research analyzing the quality of designer eggs in the market. Hisasaga wants to be a professor, teaching younger generations from diverse backgrounds about the importance of agriculture.

Primavera Leal Martinez, of Sanger, completed her B.A. in English with a 3.91 GPA in three years. Martinez is a champion of debate having received national recognition with the All-American Debater Award by the Cross-Examination Debate Association. She has also coached bilingual students in the Urban Debate Leagues. Martinez served as vice president of external affairs for the Associated Students, Inc., was a student representative on the Student Success Summit committee, a student representative for the College of Arts and Humanities, editor in chief of La Voz de Aztlán and a volunteer for Camp Kesem, a free camp for children affected by a parent’s cancer. She has also advocated for DACA students and migrant workers. Martinez plans to pursue a master’s degree in communication and coach the Fresno State Barking Bulldogs debate team before entering law school. Her goal is to become an immigration lawyer to advocate for those forgotten by the immigration system and who are most in need. 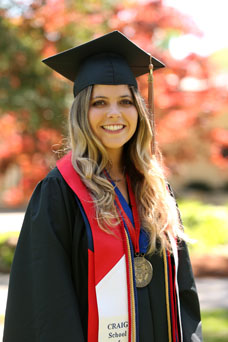 Theresa Monreal, of Madera, completed her B.S. in business administration, marketing option, with a 3.96 GPA. The seventh child of nine, she was a scholar in the Smittcamp Family Honors College and Craig School of Business Scholar Program. Monreal was inducted into Beta Gamma Sigma, the international business honor society, and Phi Kappa Phi, an academic honor society. She studied abroad at HfWU Nuertingen-Geislingen University in Germany. Monreal co-founded the Academic Coach Volunteer Opportunity at Fresno City College. The program recruits Smittcamp and Craig School scholars to tutor student-athletes struggling in school. She will continue her thesis research on the mediating role of attitude toward the brand and toward the ad this summer. Monreal credits her family and professors for inspiring her. She hopes to pursue her Ph.D. and become a professor to teach students. 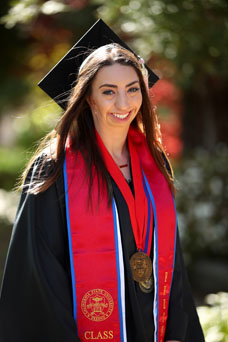 Shannon Muzio, of Fresno, is a first-generation college student who completed her B.A. in communicative sciences and deaf studies with an option in audiology and a minor in agricultural business with a 4.0 GPA. Born with moderate to severe congenital hearing loss, Muzio is using her personal experience to help increase communication for those who are deaf and hard of hearing. She earned clinical experience in Fresno State’s Speech, Language and Hearing Clinic, volunteered more than 50 hours at the Deaf and Hard of Hearing Service Center of Fresno and put in more than 400 hours of community service for the First Presbyterian Church of Fresno. Muzio earned her certificate in Conversational American Sign Language and a certificate in Cross Cultural Competency. Her goal is to promote diverse language opportunities for families of all ethnic and socioeconomic backgrounds. She will attend the University of North Carolina at Chapel Hill to pursue a doctorate of audiology and hopes to earn her Ph.D. afterward.