Kalue Yang was torn about where to apply for college when her family moved from Fresno to Milwaukee the summer between her junior and senior year at Central High School – West.

She applied to University of California and University of Wisconsin campuses. Fresno State was also on her list. Her older brother graduated from Fresno State in 2017. Her sister was a student until the family moved, while a second brother remained to finish his senior year this year.

But Yang’s decision ended up being easy.

Yang is one of 50 high-achieving high school graduates in this year’s 21st class of President’s Honors Scholars in Fresno State’s Smittcamp Family Honors College, which starts its third decade of service to the community this fall. The new scholars were welcomed to Fresno State at a reception on Friday, Aug. 16 hosted by President Joseph I. Castro and Provost Saúl Jiménez-Sandoval.

The honors college was established in 1998 with a $1 million gift from the late Earl and Muriel Smittcamp, founders of a prominent agribusiness and longtime supporters of Fresno State. The college has also been blessed with the support of other donors from the Fresno community as well as Smittcamp Family Honors College alumni.

The freshmen were selected from a pool of more than 500 applicants, said Dr. Saeed Attar, director of the honors college. High school seniors must meet one of the following three criteria in order to apply: score 1200 or above on the SAT (or 27 or above on the ACT), be in the upper 10% of their graduating class, or have a minimum 3.8 GPA in grades 9 through 11.

Yang, a psychology major with a communications minor, said she was shocked to learn that she would be a Smittcamp scholar.

“There’s a lot of intelligent, talented individuals out there, I didn’t expect myself to be chosen,” Yang said. “I couldn’t believe it.”

Each student receives a President’s Honors scholarship for his or her undergraduate degree program, up to a maximum of eight semesters. The scholarship covers in-state tuition and an optional credit for University housing.

The honors college is unique in the California State University system because President’s Scholars are admitted as a cohort. They take a series of specially designed honors courses, participate in a weekly colloquium with guest speakers and discussions, and interact in educational, scholarly and social activities.

Ian Rodrigues from Shaver Lake was almost set to attend Fresno Pacific University where he planned to run track and field. His parents are both Fresno Pacific alumni. But the Smittcamp Honors scholarship changed his plans.

“Like I think most Smittcamps would say, it’s really nice to know you are not going to have the financial burden,” Rodrigues said.

A tour of the Lyles College of Engineering also reaffirmed his decision to attend Fresno State. Rodrigues’ senior (high school) project was on civil engineering. When he attended the tour this past April, an engineering student introduced him to mechanical engineering.

“I didn’t even know about mechanical engineering,” Rodrigues said. “He explained what it was and what you can do with that kind of degree … I would like to work with cars — working on engines and improving engines.”

The 2019 cohort of President’s Scholars and their high schools are: 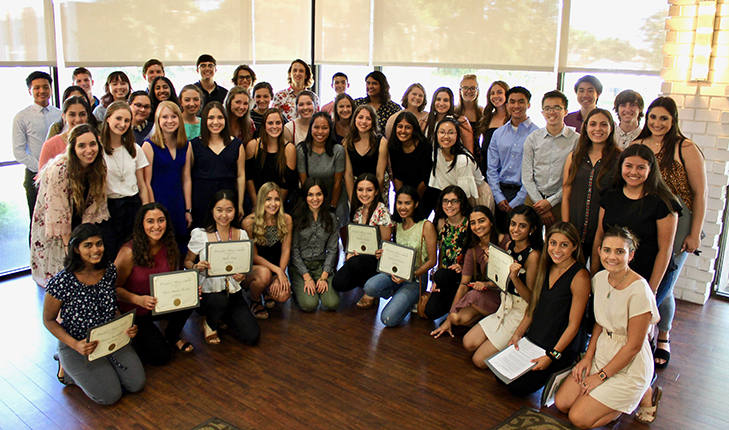