Six members of the Parnagian family who are instrumental leaders for the Fowler Packing company and the agricultural community were honored at the Ag One Community Salute, an event that raised $1.06 million to create an endowment to support Fresno State’s farm.

Proceeds from the dinner on Nov. 22 at the Fresno Convention Center came from sponsors and ticket sales to create the Ag One — Parnagian Family Endowment, which will help support the 1,000-acre University Agricultural Laboratory.

“We sincerely thank the Parnagian Family and Fowler Packing for all their contributions the past 70 years, and allowing us to honor them in a special way,” said Dennis Nef, dean of the Jordan College of Agricultural Sciences and Technology at Fresno State. “The Jordan College takes pride in creating hands-on opportunities that help our students grow and prepare for professions to serve the community and industry. The outpouring of support at the event is vital to help offset the challenges to fund a campus farm that matches the diversity and needs of the nation’s leading agricultural area.”

The event’s 19th edition spotlighted the three-generation family legacy linked to one of the nation’s largest citrus and table grape processors. The Fresno-based company is equally respected for its extensive meal and medical services that it provides to its 2,500 workers and its college scholarship program for employee families.

The company was established in 1950 by Sam Parnagian, who was known as a fruit industry pioneer before he passed away in 1980. Subsequent generations have helped expand services and product lines while emphasizing sustainability and diversity. 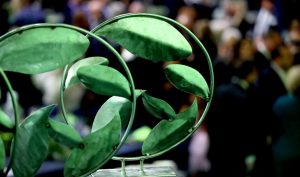 Each honoree was presented with a hand-crafted metallic piece of art created by Fresno State agricultural mechanics students who took inspiration from the Fowler Packing logo. The circular design integrated six leaves that represented the bond of family, honorees’ agricultural ties and the connection of past, present and future Parnagian generations.

The event was capped by Alcidia Freitas Gomes, Ag One executive director and senior director of development at Fresno State, who revealed the amount raised and thanked the audience for its transformational support.

“The Parnagian family, along with its employees, feel blessed to live, work and support this community and the Jordan College,” said Dennis Parnagian, chairman of Fowler Packing. “We know that our company’s founders, Sam and Gladys Parnagian, would have been very proud of how all the sponsors, contributors and ticket holders came together for this cause in such a great way. Their support helps preserve the special role that Fresno State agriculture plays in the San Joaquin Valley. Thank you all.”

The event’s naming sponsor was The Wonderful Company, and Mid Valley Packaging (MVP) Packaging and Supply was the presenting sponsor. P-R Farms and Enzo Olive Oil Company served as the dinner sponsor, and the social sponsor was Community Medical Centers.

Since 1987, the Ag One Community Salute has honored extraordinary individuals for their devoted service to California agriculture as well as their unwavering commitment to the community.

Proceeds from the event will support one of the most unique campus farms in the country based on its diversity of commodities, direct proximity to campus and location within a major metropolitan area. Its 22 enterprises include livestock and horses, field and vegetable crops, orchards, vineyards, creamery, farm market, food processing, horticulture nursery and meat science units and the nation’s first and still-largest campus winery.