Two months ago, Fresno State plant science senior Reaves Forrest drove up to his family home in Kingsburg in the afternoon, and heard a text message notification and call on his pager.

The fifth-generation farmer had been checking his family fruit orchards since 5 a.m., and was glad his day was starting to slow down.

However, the alert was a Shaver Lake Volunteer Fire Department notification for a wildfire that had started in Blue Canyon in the foothills near Tollhouse. A follow-up Sierra National Forest radio call confirmed the 10-acre fire was fanned by 20- to 40-mile-per-hour winds, and could escalate quickly.

Forrest, a volunteer for the 11-person department the past two years, immediately drove an hour to meet the team. Together, with help from another 25 firefighters, they fought and ultimately contained the Blue Fire, which would grow to 277 acres over five days.

In ensuing days as the winds lessened, he moved off the front lines to manage water truck support and dig fire lines, clear brush, cut down burning trees and rake areas that had burning embers.

Forrest was well prepared for the situation from the year before when he spent nearly a month helping fight the Creek Fire. The fourth-biggest fire in state history became a national news story as it burned nearly 380,000 acres around Shaver Lake for about five months. 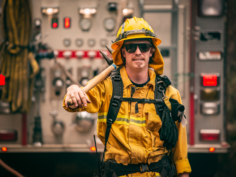 Fresno State plant science student Reaves Forrest looks back on his experience as a volunteer firefighter during the 2020 Creek Fire near Shaver Lake. (Photo courtesy of Schoenwald Photography)

Forrest recalls his Labor Day weekend in 2020 starting innocently, as he headed to Shaver Lake to go water skiing with friends on a Friday afternoon. As they pulled up, he saw an area resident, the former Big Creek fire chief, who warned him about a small fire that had just started to the northwest.

He turned around to get his gear and got the fire department call on his way to the station. The team soon headed out to nearby Camp Sierra to rouse and help evacuate unsuspecting visitors.

That first night, response organizers had hoped air support and typically mild evening weather might limit the fire’s growth until crews could create containment lines in the morning. However, the fire quickly grew as unexpected winds and extra dry and hot conditions pushed it at an alarming pace towards Shaver Lake.

The first week of the fire, firefighters worked nearly 24-hour shifts to combat the walls of flame that soared over 80-foot ponderosa pine trees and dwarfed firefighters who sometimes defended perimeters only 30 to 40 feet away.

“We had never seen a fire like that burn so hot,” Forrest said. “There is no amount of training to experience how hot, how big and how scary the fire was. We train every week, but I learned more in those two weeks than the rest of my training combined.”

The fire grew exponentially the first 48 hours to 45,000 acres, and by the end of the first week had almost quadrupled to 167,000 acres. The combined efforts of nearly 3,000 responders from as far away as Texas and Alaska ultimately saved a majority of the homes and buildings in the Shaver Lake and Huntington Lake areas, and more importantly, prevented any deaths.

Part of the fire’s ferocity was due to the large amount of dead or dying trees that had been infested by bark beetles. Recent years of drought had limited many trees’ sap production, its natural defense against the beetle, as the forest was turned from a healthy green to a flammable brown.

“It could have been even worse,” Forrest said. “The Edison forest crews had done a fantastic job with controlled burns during the winter on their property. You could see where the fire would come to the previous burn lines, and might only spot over some, but other places there was no stopping it partly because the humidity was so low.”

After the first week’s front line duties, the remaining September work days were still a minimum of 12 to 18 hours as he was assigned to spot fires and other needs as far south as Tollhouse and north towards Lake Edison.

Spot fire duty means roaming areas near the fire lines and looking for isolated fires that could be as small as 1 square-foot to 1 acre in size or larger. The potential small fires require constant attention since they can quickly escalate and start randomly from live embers carried by the winds. He also searched for smoldering flare fires that would pop up after they had been put out days before on the same, already-charred earth.

For Reaves, it grew into a 25-day commitment that officially ended on Oct. 1, with only a mandatory, two-day break after the hectic first two weeks. At that point, the fire had topped 300,000 acres and was still less than 50% contained. For Shaver Lake citizens, however, the drama had begun to settle as evacuation orders were lifted as the fire headed mostly northward into the high alpine areas with less vegetation.

He spent a few more days with the department afterward, attending to other local medical and emergency needs as permanent residents returned.

“The experience changed how I look at fires, and how I handle emergency incidents in general,” Forrest said. “When all the adrenaline is pumping you can potentially lose focus, so you need to revert to your training and muscle memory, since every second counts. There’s often a protocol we run through mentally to keep us focused on what we need to do, step by step, and to keep us all on the same page.”

Transitioning back to his routine 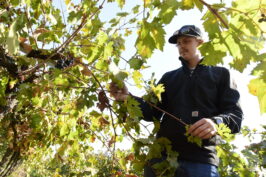 Growing up on a family farm, it was natural for Reaves Forrest chose to major in plant science at Fresno State, and continue to work on the family farm. (Photo by Geoff Thurner)

Exhausted from the grueling four weeks, Forrest still faced a busy schedule back home in Kingsburg. He had virtual classes at Fresno State to catch up on duties at the family farm that was already a month into its pomegranate harvest season.

Thankfully, his work at the family’s Youngstown Grape Distributors was more predictable than his volunteer firefighting work. The family operation raises and processes a wide variety of grapes, citrus, stone fruit, persimmons and other produce. It is equally known for its Farm Dog Juices, the nation’s only farm-to-bottle, cold-pressed juice producer.

He takes great pride in the family business, so much that he plans to remain a part of it after graduation this fall. He also hopes to eventually obtain his pest control and certified crop advisor licenses to help manage 1,000 acres of fields that range from Reedley to Earlimart.

Forrest’s equal passion for the mountains and Shaver Lake area are tied to a family skiing tradition that dates back over 50 years to his father, Mike, a 1985 Fresno State business graduate and former offensive lineman for the Bulldogs football team.

“My parents started skiing early themselves,” Forrest said, “so their rule of thumb was that if you could walk, then you could ski. I put on my first skis when I was about 16 months old, and would be up at China Peak most weekends whenever there was snow.”

Those frequent trips eventually prepared him for other ski trips around the Western United States, and later around the world, as one of the nation’s top junior downhill ski racers.

The family cabin in Shaver Lake now also provides a basecamp for his work on the China Peak emergency medical response team during the summer and winters and for his fire department training. Today, he is the only department member in his 20s, and one of only two under 50 years old.

“I appreciate the opportunity that they have given me,” Forrest said. “I wasn’t sure if I wanted to be a full-time firefighter or not, so it was a good chance to get my feet wet and get some experience.”

When he’s normally on call on the weekend, it includes an array of emergency needs, mostly related to medical assistance and traffic accidents. Forest fires are the least common, and often only a couple times a year at most. Other potential fires might relate to smaller property or lightning strike fires, or an occasional prescribed burn that has edged past its boundary and can be contained in an hour or two.

“When you see a major forest fire like that and how much damage it can do, it makes you realize how much of a difference you can make,” Forrest said. “I can see myself going into a six-month fire academy program. Whether I’m working with the ski patrol or fire department, it’s all about the same thing, trying to help others, any way you can.”

“It was great having someone like Reaves at your side to rely on,” McQuillan said. “He lives the farthest away of anyone on the team, by far, yet he is so reliable. When you’re fighting a once-in-a-lifetime fire like that, you’re not worried about someone’s age, but how cool they are under fire. I spent a lot of time out there with him during the fire, and he was someone I was proud to have on our team.”

Note: Those interested in volunteering for the Shaver Lake fire department, can visit https://shaverlakefire.org/volunteer/ for more information.