Two other events this month are:

Founded in 1970 by the late Ernesto Martinez, an emeritus professor and alumnus of Fresno State, Los Danzantes has the distinction of being the only program of its kind in the California State University system to be designated an official ambassador of the university. 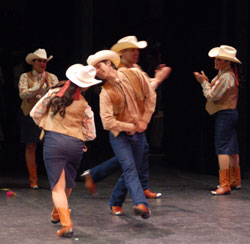 Martinez, who died June 7, 2010, “was a key figure in the development of folkloric dance in the Central Valley and one of a handful of pioneers in California who helped develop Mexican folklórico dance in the 1960s,” said Dr. Victor Torres, director of Los Danzantes and professor of Fresno State’s Chicano and Latin American Studies Department.

He said the scholarship dinner honors the legacy of Martinez “by supporting students who possess the same passion and commitment of Mexican folkloric dance as he did.”

Martinez created the first high school folkloric dance curriculum in the Valley when he taught at Selma High School (1965-69) and helped establish similar programs at Clovis High and Roosevelt High.

Martinez was also a founding member of Arte America’s board of directors, the National Association of Folkloric Dance groups (Asociación Nacional de Grupos Folkloricos), Chicano Alumni and the ChicanoLatino Commencement.  He was presented the Chicano Alumni Legacy Award in 2009.

“He was a true pioneer who forged a path that many have taken since and he inspired generations of students to pursue academic excellence and instilled in them the importance of community service,” Torres said.

“We are very excited about representing Fresno and Fresno State in this prestigious event, the largest ethnic dance festival in the country,” Torres said. “Being selected to perform after only one audition is a testament to our students’ dedication and commitment to excellence and professionalism.”

Torres said Los Danzantes’ selection to perform in the largest ethnic dance festival in the nation bolsters its position as a highly-respected Mexican dance troupe not only in California but also in the Southwest and in Mexico.

President Castro commended Torres and the Fresno State dancers, noting “this is another achievement in the long list of achievements by Los Danzantes de Aztlán that is a prime example of the university’s commitment to discovery, diversity and distinction. This program has made significant contributions to the cultural life of students, the university and the community.”

Under Torres’ tutelage, the troupe has earned top honors in international and national competitions and is considered an associate group of the world-renown Ballet Folklorico Nacional de Mexico de Silvia Lozano.

For information on the San Francisco Ethnic Dance Festival, see http://www.worldartswest.org or to purchase tickets go to http://www.ybca.org/.

For information about Los Danzantes or the scholarship dinner, contact Torres at victort@csufresno.edu or call 559-278-4115.