The ALS Ice Bucket Challenge that has swept the nation takes on a local face  when the Fresno State Department of Viticulture and Enology turns off the sprinklers to dump water in honor of retired area grower Ron Metzler, a Fresno State alumnus who is living with ALS. 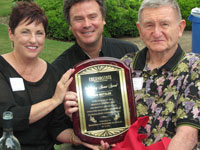 Due to the drought the department has taken extra steps to ensure that water is not wasted during this group-dump activity by gathering at the Henry P. Metzler Gazebo on the dry west lawn of the Viticulture and Enology Research Center building on campus (2360 E. Barstow Ave.).

Dr. Jim Kennedy, department chair, l lead a group of faculty, staff, students and friends in the challenge for Metzler, whose family have been longtime supporters of the Jordan College of Agricultural Science and Technology’s viticulture and enology programs. The gazebo is named in honor of Ron Metzler’s father.

Attendees will be invited to take up a bucket and join Kennedy in the group dump.

The event followed the department’s Welcome Back orientation dinner for viticulture and enology students, faculty and alumni. Donations will be collected and sent to the ALS Association. Supporters are also encouraged to donate online at www.alsa.org.

“Ron and his family have made lasting contributions to Fresno State  and the grape and wine industry,” Kennedy said. “We are proud to do our part to spread awareness of this disease and raise some funds in honor of our friend, Ron.”

Metzler graduated from the viticulture program in 1959. He received the Department Of Viticulture And Enology Outstanding Service Award in 2013,  prior to his retirement.

Earlier this year, Metzler was diagnosed with Amyotrophyic Lateral Sclerosis (ALS), also known as Lou Gehrig’s Disease. He now lives in Arizona with his wife Diadre and will not be able to attend the event.

When informed of the department’s ice bucket challenge in his honor, he sent his thanks and appreciation for everyone’s help and support, Kennedy said.