Fresno State President Joseph I. Castro announced today that retired Fresno Bee president and publisher Ray Steele Jr. has been awarded the President’s Medal of Distinction. The announcement was made before a crowd of more than 400 during Castro’s State of the University address at the Save Mart Center.

Steele, a Fowler native, graduated from Fresno State in 1968. He worked at the Associated Press Fresno bureau while attending classes, and joined The Fresno Bee as a reporter in 1967. He rose to metro editor before accepting a series of executive assignments for The Bee’s parent company, McClatchy Newspapers (now the McClatchy Company), headquartered in Sacramento.

He was appointed publisher and president at The Fresno Bee in 2001 and retired in 2008.

“Ray is an extraordinary leader, serving as chair of our Foundation Board of Governors,” Castro said. “He has been instrumental in raising financial support for student projects and takes the time with his wife, Mary Lou, to personally make a difference in the lives of our students.” 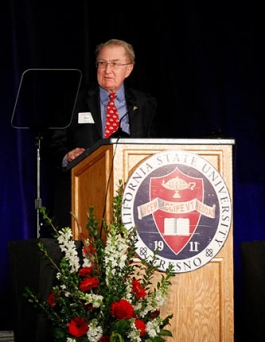 He was the Fresno State Alumni Association 2005 Top Dog Outstanding Alumnus of the College of Arts and Humanities. In 2015, Steele was awarded the Leon S. Peters Award for civic leadership.