Fresno State celebrates the diversity of its student body this week with eight commencement events May 20 and 21, including four keynote addresses and a record 950 students for the 40th Chicano/Latino Commencement Celebration.

The Educational Opportunity Program Graduate Recognition Celebration was held May 13.

Jay to deliver keynote at African American Recognition Ceremony May 21

Fresno State alumnus Ramsey Jay, Jr. will be the keynote speaker at Fresno State’s 31st annual African American Recognition Ceremony at 2 p.m. Saturday, May 21, at the Save Mart Center. About 150 students will participate.

Jay earned a bachelor’s degree in business administration with an emphasis in finance from the Craig School of Business. He was also a five-time all-conference track and field athlete.

While studying at the Craig School, he was the chief portfolio manager of the Student Investment Fund and elected -president of the Financial Management Association, which garnered national recognition as a Distinguished Chapter under his leadership.

Jay is a Wall Street-trained finance professional with more than a decade of global investment management experience, and is the founder of a global leadership development and communication consultancy organization — Ramsey Jay, Jr. and Associates.

EBONY Magazine named him as one of “30 Young Leaders Under 30.” In April 2015, Jay was invited to make opening remarks at the White House in February 2016 when President Barack Obama hosted an event honoring Ray Charles.

Dr. T. Hasan Johnson, assistant professor for the Africana Studies Program, will preside over the Ona Eto Re, or Rites of Passage. In this traditional celebration of achievement, graduates will receive gifts and will be draped with a Ghanaian Kente cloth.

The ceremony is presented by the Black Faculty and Staff Association. This year’s speaker is sponsored by the the African American Edge Initiative at Fresno State, a program designed to connect students with faculty with academic support and mentoring.

There will be a reception at the Smittcamp Alumni House at 4:30 p.m. following the ceremony where Jay will be available to sign copies of his new book “Empowering Dreamers to Become Achievers: Living Your life Without Fear and Limitations.”

“Ramsey offers a uniquely insightful and deeply compelling approach to creating a successful life filled with meaning,” said Fresno State President Joseph I. Castro. “Drawing upon his extraordinary personal journey and the wisdom gained through interactions with many mentors, including his grandmother, Ramsey urges us to boldly envision the life we want and take the necessary steps to make it a reality.

“I was inspired by his challenge to imagine seeing our most beloved mentor and to prepare to answer the question ’What did you do with the gifts I’ve given you?””

For more information, contact Dr. Francine Oputa at 559.278.4435 or at francine@csufresno.edu. 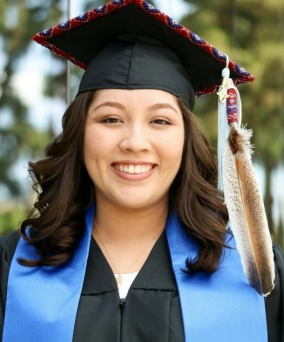 Amber Esquivel, a Class of 2016 graduating Native student at Fresno State , displays the ceremonial feather she will wear at graduation.

For this evening’s event, family and friends of the graduates are invited to give remarks about them during a dinner in their honor. At that time, graduates will be presented wool Pendelton blankets, a traditional custom acknowledging the individual’s general accomplishment.

Dr. Vickie Krenz, interim chair of the Department of Public Health, will emcee the event. Martin Gonzalez, a grad student in the Kremen School of Education and Human Development and vice president of First Nations, will play the flute during dinner.

While the practice of wearing personal ceremonial feathers has never been specifically prohibited at Fresno State — all students are permitted to decorate their graduation regalia —Castro said he is making an affirmative statement regarding free expression and cultural rights for students of American Indian tribal heritage.

This policy is in accordance with the main goal of the American Indian Recruitment and Retention Initiative, which is designed to promote a more positive, friendly learning environment at the University for indigenous people of North America.

Castro, who is San Carlos Apache on his father’s side, is a leader for the CSU Native American Initiative that is designed to better serve American Indian students.

Depending on the culture, the gift of an eagle feather can also represent a desire on the part of the donor to see a loved one through a journey, and to wish them a safe return..

“The feathers of birds of prey are used in traditional ceremonies by California Indians and also those from out of state,” Hansen said. “Birds of prey are revered in most American Indian societies for spiritual and religious reasons, which is why tribal people are allowed to have them by law.”

The collection and distribution of eagle and hawk feathers in the present-day United States is regulated under the Endangered Species Act by the Environmental Protection Agency. Non-Indians are not permitted to wear eagle or hawk feathers, because it is considered to be cultural misappropriation and a violation of federal law, Hansen explained.

Asian-American and Pacific Islander Commencement May 21

Fresno State will host the Asian-American and Pacific Islander Commencement Celebration at 4 p.m., May 21, in the Satellite Student Union.

About 50 graduates will be joined by Fresno State dignitaries, President Joseph I. Castro and Provost and Vice President of Academic Affairs Dr. Lynnette Zelezny.

Castro will introduce keynote speaker Deborah J. Ikeda, who is the outgoing president of Clovis Community College. Students from the California State University Asian American Pacific Islander Ambassadors program will be recognized at the event.

A record 950 students have signed up for the 40th Chicano/Latino Commencement Celebration Saturday. More than 12, 000 attendees are expected.

In addition to U.S. Poet Laureate Juan Felipe Herrera, also being recognized are the founders of the celebration, Manuel Olgin, Tony Garduque, Frances Pena and the late Ernesto Martinez. The event was born from a master thesis by Olgin and Garduque that created the Chicano Alumni club at Fresno State.

Members of the class of 1977 through 1980 will also be recognized. See full story: bit.ly/FSN-ChicanoCommence16Herrera.  See #clcc16fs photos:

Alumna Arambula-Reyna to speak at LGBTQ+ grad ceremony May 20

A native of Selma, Arambula-Reyna graduated with a degree in political science in 1995 before earning a juris doctorate degree at San Joaquin College of Law.

The graduation ceremony is presented by United Student Pride, the Rainbow Alumni and Allies Club and the Cross Cultural and Gender Center at Fresno State.

For more information, contact Peter Robertson at 559.278.4669 or probertson@csufresno.edu.