Dr. Sam Iacobellis, a Fresno State alumnus who helped thaw the Cold War when he headed the team that developed the B1-B bomber and once stood on the Bulldog Stadium field for a university flyover by the plane, died Saturday. He was 87.

Dr. Iacobellis started on a drafting board for $1.62 an hour and rose to become an aviation industry leader who is known fondly as the “Father of the B1-B bomber.”

He earned a degree in mechanical engineering from Fresno State in 1952 and a master’s in engineering at UCLA in 1963. He was named Top Dog, the Fresno State outstanding alumnus, in 1982 and later received an honorary doctorate from the University.

“Sam Iacobellis was a proud alumnus of Fresno State who personified what it means to be a Bulldog for life,” said President Joseph I. Castro. “He had a big heart for students – especially those like him who come from humble backgrounds – and he repeatedly returned to Fresno State to offer his time and expertise to help engineering students succeed. His long and very successful engineering career is inspirational to all of us.

“I will miss his kind and gracious manner and his extraordinary stories about being part of America’s engineering and space history. The entire Fresno State community offers its condolences to Sam’s family and friends.”

Dr. Iacobellis attended Edison High School where he played football and eventually was offered a scholarship to play at Fresno State.

While a Bulldog, he signed on with North American Aviation when it was on the Fresno State campus recruiting employees. He reported to work in Los Angeles the day after graduation to the company that was later bought by Rockwell International Corp., and eventually The Boeing Company.

Playing a major management role in the development and operation of the space shuttle and its main rocket engines, Dr. Iacobellis retired as deputy chair of Rockwell after a 43-year career.

He was instrumental in developing the relationship between Fresno State and Boeing, the world’s leading aerospace company and the largest manufacturer of commercial jetliners and military aircraft combined.

He connected Boeing and Fresno State for development of the University’s Husband-Boeing Honors Scholars Program in Engineering.

The Husband-Boeing Honors Scholarships were established using the $2 million gift from the Boeing Company to honor Fresno State alumnus the late Col. Rick Husband, who had served as commander of the ill-fated Columbia Shuttle and died when Columbia broke apart during re-entry after a successful 16-day mission.

Now in its eighth-year, the program provides talented high school and transfer students full tuition funding enabling them to pursue and complete their degrees without any tuition burden.

They are recruited from local elementary and secondary programs using the linkages with the University’s existing Smittcamp Family Honors College, the Mathematics Engineering Science Achievement Schools Program and the Engineering Pathways Program in Fresno State’s Lyles College of Engineering.

For his lifelong support of the University, he was conferred an honorary Doctor of Science Degree by the California State University at the Fresno State Commencement Ceremony in 2006. In 2007, Dr. Iacobellis stood on the Bulldog Stadium field for a B1-B flyover for Fresno State,   a rare occurrence for a university.

In May 2016, he was invited back to keynote the Dean’s Medalist Luncheon for Fresno State’s Lyles College of Engineering, where the college’s top student for the year is honored with the Dr. Sam Iacobellis Award.

The college’s news site recounts the story of Dr. Iacobellis — born Aug. 17, 1929, in Fresno to an immigrant whose father came from Italy to Ellis Island in 1914 — and his meeting with the college’s 2016 Dean’s Medalist, Alan Suarez, who is also a mechanical engineer, a Lyles College alumnus and son of an immigrant.

“Meeting Mr. Iacobellis was pretty unreal,” Suarez said for the news site written by Rebecca Wass, Lyles College communications specialist. “You always read about people like him; individuals that have had a huge impact on history and possess unreal amounts of knowledge. I really enjoyed our conversations, and he gave me so much advice in just a short time.”

Upon learning of his passing, Suarez said, “Sam was an incredible individual who leaves a legacy that will last centuries. I feel extremely proud to have met him and even more humbled to have received his award. My deepest condolences go out to his family and friends.”

At the May luncheon, Dr. Iacobellis said that his work was one of the most rewarding experiences one could have.

“I was taught to never take shortcuts, because the life of a pilot or an astronaut or a crew member is in your hands,” he said for the news site. “I never went to work a day without looking forward to it. I know I was lucky, but I’d like to know that I made some of that luck.” 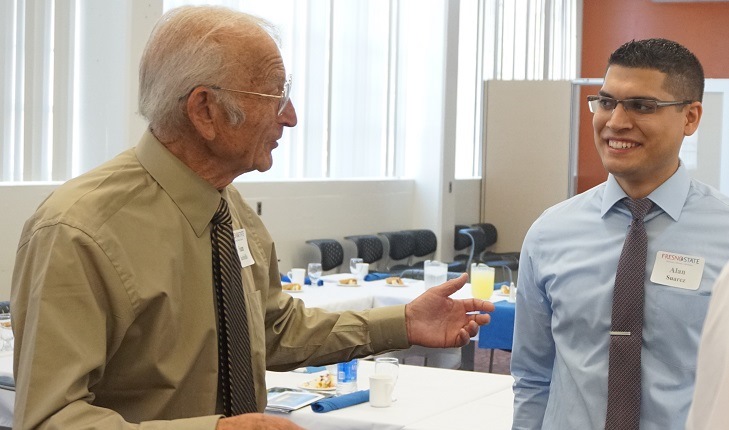 Dr. Sam Iacobellis at the Lyles College of Engineering Dean’s Medalist Luncheon in May at Fresno State with the recipient of the award in his name, Alan Suarez.