U.S. Army Lt. Gen. Michael W. Vane will be among three guest speakers at Fresno State’s Veterans Memorial Service at 10 a.m. Thursday, Nov. 10, that will also feature the Armed Forces Walk of Honor. Veterans, active military service personnel, students and employees as well as representatives of area legislators will carry flags in the march across the campus.

The free, public event designed to honor and remember the nation’s veterans for their sacrifices and dedication to country will be held at the Veterans Monument on campus (at the flag poles near the Thomas Building) as part of its Veterans Week Celebration underway since Oct. 28. (Full schedule).

The observance is presented by the Fresno State Veterans Council, which was established in 2009 to assist veterans with resources and to help them access and achieve in college.

The council is made up of representatives from two campus organizations, the Student Veterans Organization and Omega Delta Sigma; the Army ROTC Bulldog Battalion and the Air Force ROTC Detachment 35; and three Fresno State programs that provide on- and off-campus resources to more than 320 veterans enrolled at the University: the Veterans Services in the Admissions Office and the Student Support Services Veterans Program, both housed in Student Affairs, and the Veterans Education Program in Continuing Global Education (Academic Affairs).

Fresno State has a long history of supporting veterans including the CSU Troops to College initiative and the new online Veterans Virtual Resource Center, which assists active military, reservists, veterans and family members to successfully navigate the University through campus and community resources.

The campus is closed Nov. 11, the national holiday honoring veterans of the U.S. Armed Forces. The University’s Army and Air Force ROTC units will be participating that day in the Fresno Veterans Parade led by the Bulldog Marching Band, in Downtown Fresno. It begins at 11 a.m. in front of Fresno City Hall at Tulare and P streets, and ends at Chukchansi Park (1800 Tulare St.).

A limited number of free t-shirts and signed posters will be given to fans during the game. Guests will also be able to take pictures with Fresno State’s 2016 Mountain West championship trophy, and children will shoot free throws on the court after the game.

After the memorial service on campus Thursday, attendees will begin the Armed Forces Walk of Honor from the Rose Garden located west of the monument and conclude at the Henry Madden Library where guests can visit an exhibition, “Honoring Our Veterans: We are the Home of the Free Because of the Brave.” The free, public showcase of memorabilia and pictures donated by students, staff, faculty and alumni runs through Nov. 30.

In addition to Lt. Gen. Vane, who speaks at about 10 a.m., guest speakers include U.S. Air Force Lt. Col. Erick J. Lawson at noon for the honor walk and Fresno State Provost Lynnette Zelezny at 12:55 p.m. in the library for the exhibit reception

Vane graduated from the U.S. Military Academy in 1975 and has served in more than 25 different countries and 20 U.S. states. His work involved leading and managing organizations ranging in size from 40 to more than 1 million soldiers.

Lawson is a Fresno State alumnus who was commissioned through University’s Air Force ROTC Detachment 35. Prior to retirement, Lawson was the Chief of Intelligence, Surveillance and Reconnaissance division within the 608th Air Operations Center in the Barksdale Air Force Base in Shreveport, La.

The Army ROTC Bulldog Battalion will present the colors with bagpiper Mark Little before Lorilyn Alamano, an employee of the Fresno State police department, sings the National Anthem. Cody Sedano, a member of the Student Veterans Organization and the council’s liaison to the Associated Students, Inc., will serve as the master of ceremonies, and George Cardoso of Omega Delta Sigma will lead the Pledge of Allegiance. Chaplain Clayton Diltz will recite the Invocation and the Benediction. The Air Force ROTC and bagpiper will retire colors.

Other events included the Veterans Day 5K Run Nov. 5 and the Salute to Services Night at the Bulldogs football game Oct. 28. 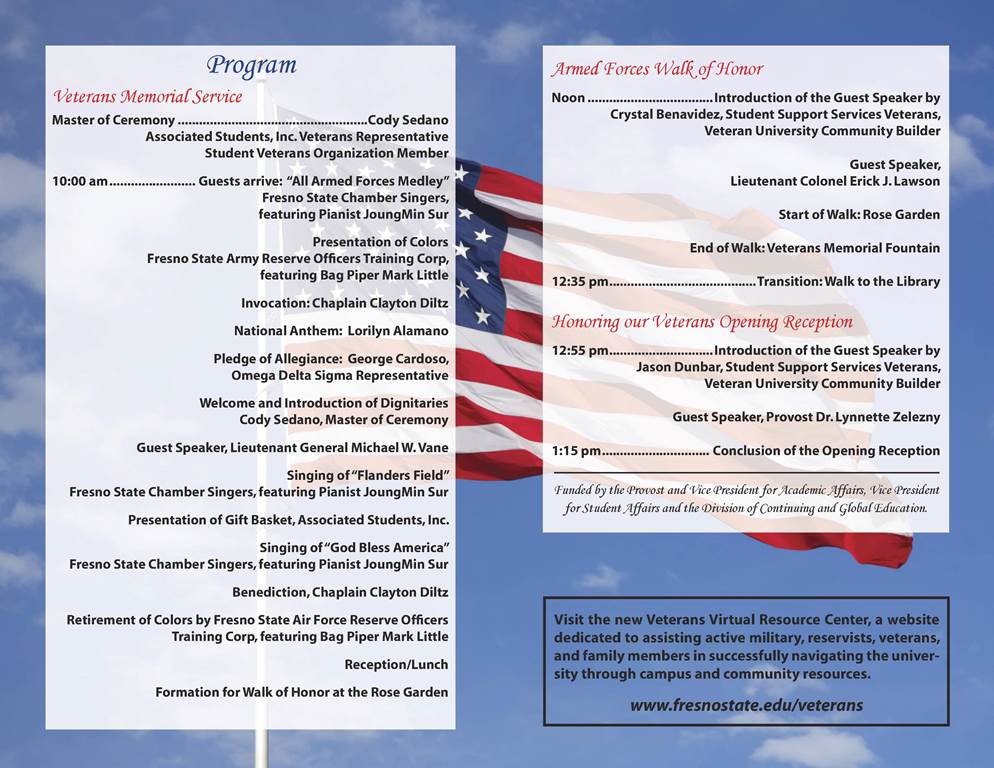