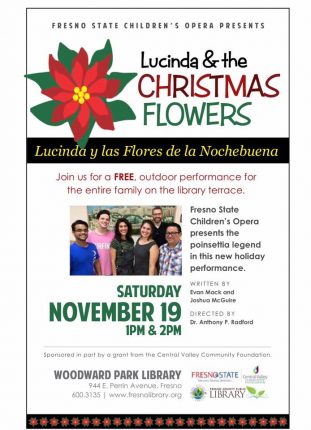 The library will offer craft activities for children at noon.

A second free, public performance is scheduled for Dec. 17 at Campus Pointe, east of Fresno State.

The 45-minute production, directed by Dr. Anthony Radford, is based on a Mexican folktale about poinsettias and the spirit of giving at Christmastime.

The four–member cast consists of voice students Alejandra Tejeda of Porterville, Chrysanthe Pappas of Fresno, Ed Olivarez of Visalia and Christopher Rodriguez of Bakersfield, with pianist Jordan Williams of Selma.

The opera will also be performed at the Christmas in Mexico concert presented from 4 to 6 p.m. Dec. 3 by the Fresno State dance troupe Los Danzantes de Aztlán at the Satellite Student Union. For those tickets: http://bit.ly/2f4qJad.