Twenty-eight immigrants who perished in a plane crash 69 years ago this Saturday will be the focus of a special event at Fresno State tonight celebrating the launch of the book “All They Will Call You” by award-winning author, poet and performance-artist Tim Z. Hernandez. 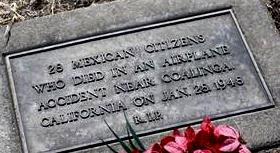 The free, public event presented by the University’s new Fresno State Valley Public History Initiative: Preserving our Stories program and several campus co-sponsors, will be from 6 to 8 p.m. Friday, Jan. 27 at the Satellite Student Union.

It will feature a multi-media storytelling performance by the author, along with performances from musicians Joel Rafael; John Boomer, one of the original performers of the Guthrie song; Lance Canales a local musician whose band performed the song at the 2012 Steinbeck Festival while Hernandez recited the names; and local mariachero Raoul Hernandez, a Fresno State and Roosevelt High School alumnus who performed with the mariachi bands for both schools and later with Los Angeles-based Metalachi, a heavy metal mariachi group.

Family members of two of the plane crash victims — Ramon Paredes Gonzalez and Guadalupe Ramirez Lara — also will be introduced: brothers Jaime and Guillermo Ramirez who are the grandson and nephew of the two.

The victims of the plane crash were largely forgotten before becoming the subject of the internationally renowned folk ballad “Deportee (Plane Wreck at Los Gatos)” by the legendary Woodie Guthrie. Now the book “All They Will Call You” (University of Arizona Press) reconstructs the 1948 Los Gatos Canyon airplane crash near Coalinga that resulted in the death of 32 people, including 28 Mexican immigrants who were being deported.

Their names were not published in media accounts or listed on the mass grave in West Fresno’s Holy Cross Cemetery until Hernandez, while researching another book, came across a newspaper 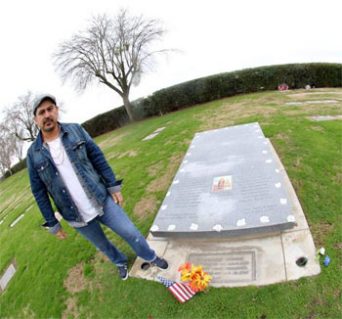 account of the crash and realized it was the story depicted in Guthrie’s famous song.

book gives identities to the lives lost in the crash and tells the story of the forgotten Mexican passengers. The title of the book comes from Guthrie’s lyrics “all they will call you will be deportee,” Hernandez said.

“Art and music are very powerful, sending a message that has a staying power over long periods of time,” Hernandez said. “In this case it was in the form of a question that Woody Guthrie wrote that has lasted for 69 years: ‘who are these friends scattered like dry leaves?’ It lasted long enough for me to come and try to answer that.”

“Through Hernandez’s amazing work, I now know who these people were, their lives, their loves, and their journeys,” the younger Guthrie said in a review of the book. “‘All They Will Call You’ is a heart-wrenching read for anyone who cares, and the names – now etched in stone in a far off graveyard – have become friends who will travel with me as long as I am walking.”

As part of his journey to bring forth their identities and stories, Hernandez  led a community-driven campaign with Fresno musician Canales and the Roman Catholic Diocese of Fresno to install at the tomb a granite monument bearing the names of all the victims. A benefit concert in 2013 staged by Fresno musicians, artists and writers raised $4,000 for the historic memorial headstone and another $10,000 was raised from donors around the world in collaboration with Nora Guthrie and the Guthrie Foundation. The monument was dedicated in 2013.

Hernandez, an assistant professor in the Bilingual MFA in Creative Writing Program at the University of Texas El Paso, holds a bachelor’s in writing and literature from Naropa University and an MFA from Bennington College in Vermont.

He has won several awards including the 2006 American Book Award from the Before Columbus Foundation for his debut collection of poetry, “Skin Tax” (Heyday Books).

“All They Will Call You” will be available for purchase at the event, which will include a book-signing and light refreshments. 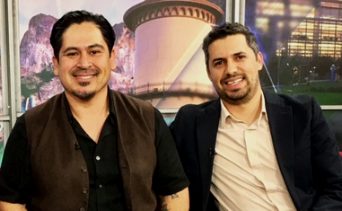 Dr. Romeo Guzman, history professor in the College of Social Sciences and founder of the Valley Public History Initiative, will MC the event.

“We’re honored to host the official book launch for Tim Hernandez’ moving and historically groundbreaking book,” said Guzman. “It’s a book and project that beautifully captures the Valley Public Histories’ core values and methodologies. Like the book, the Valley Public History Initiative seeks to uncover forgotten histories and voices, build new archives by working with underrepresented communities, and to create opportunities for history to exist outside the academy.”

He said with the current wave of new immigration policies emerging on a national level, the history project and the book are even more significant.

The book launch is co-sponsored by The Valley Public History Initiative: Preserving our Stories, the Chicanx Writers and Artists Association, the College of Arts and Humanities, the Delta Gamma chapter of Sigma Tau Delta and the Chicano and Latin American Studies Department.

Parking on campus is free on weekends, beginning at 4 p.m. on Fridays. Lots 15 and 16 (Barstow and Maple), and Lot 6 (near the Peters Building, access from Woodrow between Barstow and Shaw) are nearest the Satellite Student Union.