Fresno State will salute Joe Williams, former Fresno City Councilman and Top Dog alumnus, by posting the University’s flags at half-staff from sunrise to sunset Thursday, Feb.16, the day of his funeral service. 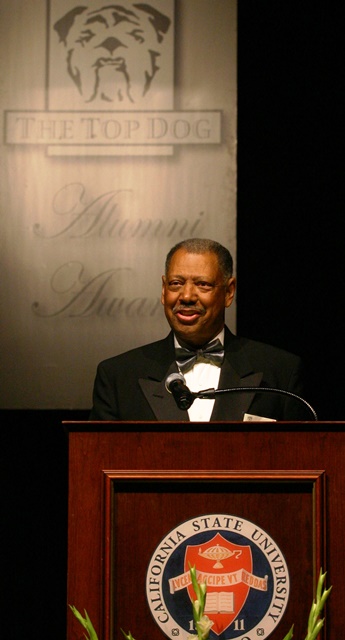 Mr. Williams, a U.S. Army veteran who also was the first to receive the Fresno State President’s Medal of Distinction, died Feb. 8.  He was 79.

A 1956 graduate of Edison High School, Mr. Williams was awarded a football scholarship to Fresno State and graduated in 1967 with a bachelor’s degree in social welfare, becoming a longtime Red Wave booster.

In addition to his election to the Fresno City Council in 1977, becoming the city’s first African American elected to the position and serving two four-year terms, he was the head of the Fresno County Economic Opportunities Commission for 23 years. He was a veteran of the War on Poverty, serving on numerous boards and commissions. At Fresno State, he served on the President’s Advisory Council.

The President’s Medal of Distinction was established in 1993 and is presented to citizens of the region, state or nation whose contribution in the area of professional achievements or public service represents a contribution of great significance to the University. The first presentation in 1994 was to Mr. Williams and Dr. George Kauffman, professor emeritus of chemistry.

In 2006, the Fresno State Alumni Association presented Mr. Williams its Top Dog Alumnus Award on behalf of the College of Health and Human Services.