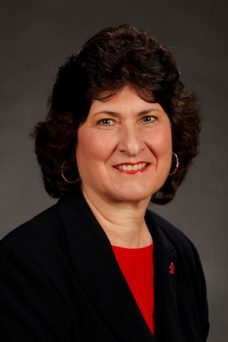 Shirley Melikian Armbruster, associate vice president for University Communications at Fresno State, will receive the 2017 Jim Tucker Media Service Award presented by the Department of Media, Communications and Journalism for her journalistic and communications accomplishments.

The award was established in 2004 as a tribute to Jim Tucker’s decades of service to the department as a professor and chair. The award honors a media professional in or from the San Joaquin Valley who has performed with distinction. Armbruster will be announced as the recipient during the department’s celebration of graduates at 9:30 a.m. Friday, May 19, at the Satellite Student Union on campus.

Armbruster is Fresno State’s chief spokesperson and leads a 15-member, award-winning communications team that tells the University’s story through social media, media relations, graphic design, photography and videography. Armbruster is a member of the President’s Cabinet and provides media and public relations counsel to University President Joseph I. Castro and senior administrators. She is originally from Fowler and studied journalism at Fresno State under Tucker and the late Roger Tatarian.

“Shirley is the standard bearer for media professionals,” said Dr. Katherine Adams, the department chair. “Throughout her career — first as a journalist and later as a public relations practitioner and leader — she has produced the highest quality work with the highest level of integrity. It is a joy to honor her today.”

Armbruster, who is retiring in July, was also honored by the department in 2014 when she was named an MCJ Fellow at the MCJ Alumni and Friends Chapter Hall of Fame event.

She serves on several campus boards and committees, including Strategic Planning, WASC Reaccreditation and the DISCOVERe tablet task force. She also co-chaired the University’s rebranding effort in 2012. She chairs the American Association of State Colleges and Universities (AASCU) Advisory Council for Communications and Public Affairs and is a member of the national Executive Committee of the Public Relatins Society of America (PRSA) — Counselors to Higher Education. She served a three-year term on the national CASE Commission on Communications and Marketing.

She was named the 2016 Professional of the Year by the Central California Chapter of PRSA and was selected for the 2016 Staff Leadership Award by the Fresno State Women’s Association. She has won numerous news writing awards, including the National Epilepsy Society Feature Story of the Year, PRSA regional awards and CASE District VII Award of Excellence for Integrated Marketing Program.

Prior to her service at Fresno State, Armbruster worked as an award-winning reporter and editor at the Visalia Times­Delta and The Fresno Bee.

Tucker retired in 2007 after 39 years as a journalism professor at Fresno State. He was department chair for 12 years.