Fresno State’s eight schools and colleges, along with the Division of Student Affairs and Enrollment Management, selected nine outstanding students to honor as Deans’ Graduate Medalists for the class of 2018.

Each dean selected a graduate and undergraduate medalist based on academic excellence, community involvement and other achievements. Fresno State’s 2018 Undergraduate Deans’ Medalists were announced May 7.

At Fresno State’s 107th commencement on Saturday, May 19, one medalist from the group below will be announced as the University Graduate Medalist, Fresno State’s top academic honor for a graduate student. 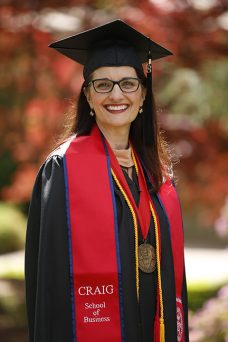 Jodi Benbrook, of Clovis, completed her executive master’s in business administration with a 4.0 GPA. She previously earned her A.S. in nursing from Fresno City College in 2002 and her B.S. in nursing from Fresno State in 2005, attending classes and caring for her children while working full time on the night shift as a labor nurse at Clovis Community Medical Center. When her career progressed unexpectedly from the bedside to management, Benbrook decided to pursue an advanced degree. Now the director of women’s and children’s respiratory and rehabilitation services at Clovis Community, Benbrook says she discovered that in management she can make a difference on the way care is given on a broader scale throughout an entire department. She says, as a nurse in business school, classes were not easy, but they allowed her to see the hospital in a new way, balancing clinical quality with financial stewardship. Benbrook says she is determined to do good work with the degrees she has earned so she can make a positive difference in the community.

Cheenou Her, College of Science and Mathematics 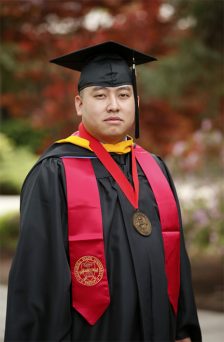 Cheenou Her, of Fresno, completed his M.S. in chemistry with a 3.9 GPA. He previously earned his B.S. in chemistry from Fresno State in 2014. A first-generation college student, Her was born in a refugee camp in Thailand before his parents and six siblings moved to the United States after the “secret war” to escape persecution. Her’s favorite childhood memories include recreational activities, sports and the annual trips to Santa Cruz facilitated by the Pinedale Community Center. His junior year at Clovis West High School, Her took a chemistry course and enjoyed it so much he declared it his major at Fresno State. For his master’s thesis, he analyzed three-dimensional structures of antifreeze glycoproteins using high-resolution nuclear magnetic resonance spectroscopy – developing a new, more powerful way to analyze samples. He also contributed to three other research projects, including one on the effect of sucralose on enzyme kinetics that resulted in a patent pending. Her plans to pursue his Ph.D. in the fall, and to ultimately become a professor at a prestigious university. 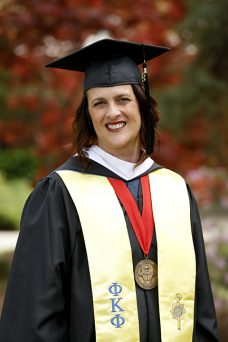 Christina Macias, of Ventura, completed her M.A. in early childhood education with a 4.0 GPA. She previously earned her B.S. in biology (ecology) from Fresno State in 2000 and her A.A. in liberal studies from Fresno City College in 1994. After earning her bachelor’s, Macias went on to work as a biologist for the state of California before creating a private preschool to provide responsive, relationship-based care to young children while leveraging her science background. In 2015, she enrolled in a master’s program at Fresno State, motivated to pursue a career in early childhood education and advocacy. She proposed a demonstration garden for the campus to be used as a science-based resource for P-12 students and teacher candidates, as well as a tool to battle food insecurity. The location is being finalized. Macias also participated in two research studies, including a math coherence project by Northwestern and Vanderbilt universities, and a Next Generation Educators Initiative to help design the CREATe Rubric. Next, she plans to pursue a Ph.D. at UC Davis. 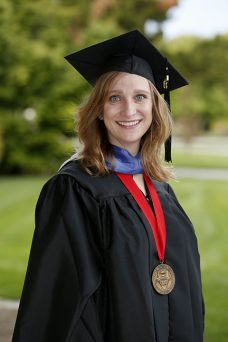 Savannah Nakamura, of Fresno, completed her M.A. in history with a 4.0 GPA. She previously earned her B.A. in art history and Italian studies at Long Beach State in 2011 and spent a year studying abroad in Florence, Italy. In 2013, she moved to South Korea to teach English to elementary-aged students and discovered a passion for teaching. She then entered Fresno State’s master’s program and focused her research on the Enlightenment concepts of politeness and improvement in 18th-century Britain through the lens of Eliza Haywood’s “The Female Spectator,” the first periodical written by a woman for a female audience. She also worked in the Henry Madden Library’s special collections, writing and editing articles highlighting the history of Fresno State’s amphitheater, Greek life and more. Her work was published in the Fresno State Alumni Association newsletter. As a graduate, Nakamura plans to teach at the community college level and to possibly pursue another degree. 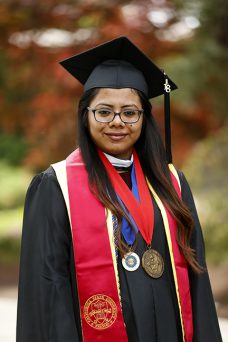 Guadalupe Remigio Ortega, of Fresno, completed her M.A. in English (rhetoric and writing studies) with a 4.0 GPA. She previously earned her B.A. in English with a minor in philosophy from Fresno State in 2015. A first-generation college graduate, she grew up laboring in the fields alongside her parents — Mixtec native speakers from Oaxaca, Mexico. Remigio Ortega’s master’s thesis focused on implementing critical race methodologies in writing classrooms as a means of alleviating the marginalization of Latino/a students. The assignments she created as part of her research were added to Fresno State’s first-year writing program sourcebook to be used as a guide for teaching associates. She volunteered as a committee member for the Undergraduate Conference on Multiethnic Literatures of the Americas and served as a student representative for the Graduate Net Initiative to help make graduate education more attainable. In September, she will pursue a Ph.D. in composition and rhetoric at the University of Wisconsin-Madison. Her goal is to become a college professor and work with graduate students to reach out to marginalized communities. 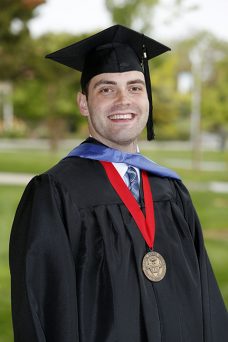 Jeffrey Ruser, of Schaumburg, Illinois, completed his M.A. in kinesiology (sport psychology) with a 4.0 GPA. He previously earned his B.S. in psychology from the University of Illinois at Urbana-Champaign in 2016. Ruser surveyed nearly 600 NCAA student-athletes for his research on athlete burnout, coach-athlete relationships and gratitude. His work suggests strong coach-athlete relationships may increase athlete gratitude. His study earned him the Outstanding Thesis Award and the American Kinesiology Association Master’s Scholar Award from the Department of Kinesiology. Ruser’s service including serving as teaching associate for kinesiology activity courses and working with dozens of Wayfinders students who have intellectual disabilities. The sport psychology skills he teaches them, including goal setting and positive self-talk, are similar to skills he works on with college and high school athletes. In the fall, Ruser will pursue a Ph.