The eight schools and colleges at Fresno State, along with the Division of Student Affairs and Enrollment Management, selected nine outstanding students to honor as Deans’ Graduate Medalists for the class of 2019.

Deans selected a graduate and undergraduate medalist based on academic excellence, community involvement and other achievements. Fresno State’s 2019 Undergraduate Deans’ Medalistswere announced May 6.

At Fresno State’s 108th commencement on Saturday, May 18, one medalist from the group below will be announced as the University Graduate Medalist, Fresno State’s top academic honor for a graduate student. 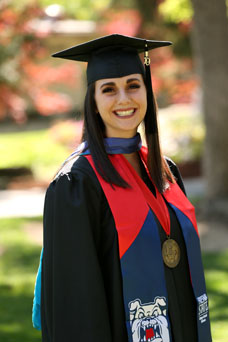 Shelby Elia, of Clovis, completed her M.P.A. with a 4.0 GPA. She previously earned her B.S. in criminology, victimology option, at Fresno State in 2015. As an undergraduate, Elia worked on research on the relation between a juvenile’s race and his or her contact with law enforcement in Fresno County. She would go on to present her research at symposiums and conferences. The work set her on a course to look deeper into public policy. Elia returned to Fresno State in 2016. She was accepted as a research fellow in the College of Social Sciences’ Institute for Leadership and Public Policy and studied the mechanisms that lead to wrongful convictions and societal perceptions of individuals exonerated from the criminal justice system. She won several awards and presented at the World Society of Victimology Symposium in Hong Kong. Elia wrote her master’s thesis on the current state of Veterans Affairs and veterans’ perceptions of their federal benefits. She is employed by the City of Clovis and plans to pursue her doctorate. 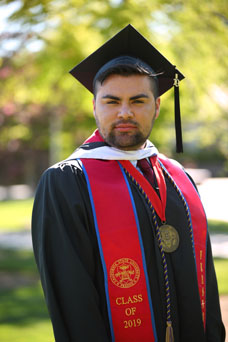 Juan Guzman, of Fresno, completed his M.A. in education — educational leadership and administration with a 4.0 GPA. He previously earned his B.A. in criminology and philosophy at Fresno State in 2017. Guzman worked the past two years as the graduate assistant for the University Student Union, where he served as the project and campaign manager for the New Student Union project. In his role, Guzman created an 11-month marketing plan for the project, worked with the design company on drawings of the proposed building, scheduled over 150 presentations, planned and hosted three campus-wide informational forums and scheduled over 200 outreach events. His work paid off in 2018 when students overwhelmingly approved a referendum to build the New Student Union. Guzman is grateful for the experience, which will help him achieve his goal of becoming a university president, and the results, which will help improve the college experience for students. 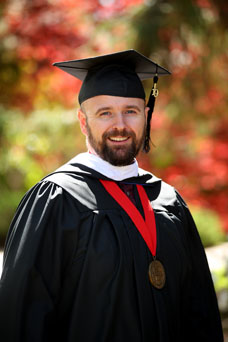 Mason Lamb, of Clovis, completed his M.A. in music composition with a 4.0 GPA. He previously earned his B.A. in music composition from Fresno State in 2006. After graduating, Lamb put his degree to work and settled down with his family, but realized he wasn’t fulfilling his professional or creative potential. At the suggestion of his wife, Lamb returned to Fresno State and enrolled in classes through Open University in spring 2017. He was admitted into the graduate program later that year. Since then, he has worked to improve his art while helping others and becoming a sought-out substitute professor. Lamb premiered a piece at the Walt Disney Hall in Los Angeles with FOOSA and other pieces with the Youth Orchestra of Fresno, the Ruse Philharmonic in Ruse, Bulgaria and with members of the Fresno Philharmonic in the Leon S. Peters Ellipse Gallery at the Henry Madden Library. He recently served as proofreader and copyist for the premier of three film score suites in concert with the Orquestra Sinfónica de Puerto Rico. Lamb was also president and conductor of the Fresno State New Music Ensemble and served as an instructor. He intends to continue pursuing film music and a doctoral degree. 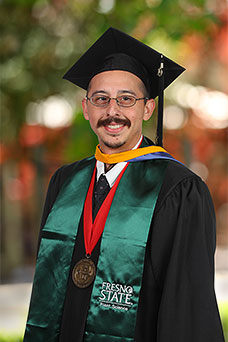 Anthony Mele, of Fresno, completed his M.S. in plant science with a 4.0 GPA. He previously earned his B.A. in history at the University of California, Santa Cruz in 2015. During the recent California drought, his concerns about the future of water grew and carved a path back home to Fresno where he could learn to develop innovation in irrigation and secure a sustainable future for Valley farmers. Mele took prerequisite classes at community colleges in the Central Valley to meet the requirement for the plant science graduate program. Once accepted, he wasted no time. He worked as a research assistant in the Center for Irrigation Technology, was a member of the Tri-Ag Societies and volunteered during the FFA Field Days, the Water-Wise Plant Exchange and with the San Joaquin River Conservancy. Mele presented his research on water efficiency in drip irrigated sugar beets at numerous competitions and recently placed first in two national contests. He hopes to continue his irrigation research while providing outreach and consulting for Valley farmers. 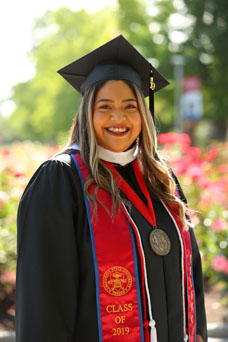 Camerina Morales, of Orange Cove, completed her M.A. in education — educational leadership and administration with a 4.0 GPA. She previously earned a B.A. in sociology from University of California, Merced in 2017. The daughter of Severina and Martin Morales, she credits her family with instilling in her the ideals of hard work, dedication, perseverance and resistance. She was a graduate assistant for leadership programs in Student Involvement, executive chair for the HEAL Graduate Student Association and vice president of Bulldogs for Justice. Morales was also a mentor and supervisor of the Campus Involvement Ambassadors and participated in many campus programs, committees and student experiences. She has a passion for social justice, challenging systematic norms and institutions, and creating inclusive spaces and programs for all students on campus. Morales plans to continue her work in higher education and focus on serving underrepresented, marginalized students on college campuses. 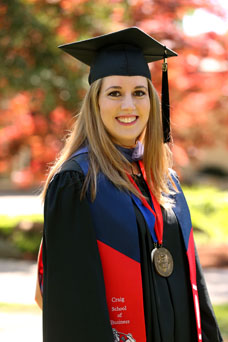 Catherine Reilly, of Fresno, completed her M.B.A. in business administration with a 4.0 GPA while navigating the role of a first-time mother. She previously earned her M.A. in music business from New York University in 2010 and a B.B.A. in marketing and B.A. in music from The College of William and Mary in Virginia in 2008. After earning her M.A., Reilly went on to work in marketing for the arts in Philadelphia. When her husband landed a job at Fresno State, she followed. While evaluating a shift in her marketing career, Reilly worked as a student assistant for the Kremen School of Education and Human Development and was then hired by accesso Technology Group where she is now digital marketing manager. She completed much of her M.B.A. while employed and through the birth of her daughter. Reilly is a member of the Phi Kappa Phi and Beta Gamma Sigma honors society, served as a member of the Bricks Committee in the Kremen School and volunteers on campus and in the community. She looks forward to growing in the world of marketing and strategy and plans to move into management.