A 545-mile journey from San Francisco to Los Angeles, through 58 towns and across eight counties in 7 days — on a bicycle. That’s how Dr. Michelle DenBeste and hundreds of others spent the first week of June, united to raise funds for lifesaving services for people living with HIV/AIDS.

It’s the second straight year DenBeste, dean of the College of Social Sciences at Fresno State, has participated in the AIDS/LifeCycle. It’s a ride she said she wanted to do for many years but one that seemed daunting until she set her fears aside.

For seven days, cyclists pass through communities in California to raise awareness of AIDS and remember those who have died of the condition. Each day of riding can range from about 40 to 100 miles. At the end of each day, cyclists arrive at a camp to eat, shower and rest before riding again the next morning.

Each rider must raise at least $3,000 to participate. This year, DenBeste raised a little more than $5,000. 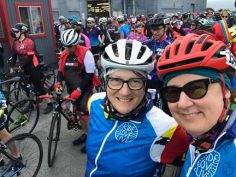 Her friend Robin Sischo, who is a part-time history professor at Fresno State, also participates in the ride. Together they spent months fundraising, training and preparing for the ride in their off time.

“For me, it’s important to be able to talk about AIDS,” DenBeste said. “AIDS is largely treatable and preventable but, despite more knowledge, there is still stigma attached. The ride provides a way to talk with your community about AIDS, LGBTQ issues and AIDS in diverse communities. AIDS is not just a gay issue.”

She described the ride as one that provides a loving and caring community.

“For a week of my life I can sit at a table for a meal and random strangers will talk with me. As we ride through communities, children blow bubbles, little kids hand out licorice, drag queens hand out strawberries, and people sing and cheer along the route,” DenBeste said. “When stopped at a stop sign, people will ask what you are doing and why. It’s a chance to educate folks.”

The ride serves as a platform where everyone’s identity is embraced. A group of riders are named the Positive Pedalers (riders with HIV), another group seeks to educate people on the high numbers of black women infected with HIV and another group shows its concern with women’s issues.

For DenBeste, the ride serves as a week away from the busyness and mayhem of modern life. “You sleep in a tent and you ride your bike,” she said. “There is very little internet access and not much time for it. It’s a week of making new friends, meeting new people, making a difference in a little piece of the world and focusing on the simple things. It’s oddly relaxing to only be responsible for pedaling my bicycle and setting up my tent.”