Growing up, Kameron “Kami” Hurst and her two older siblings would all jump into the car with their mother at the wheel and head down to Southern California from the small foothill town of Sonora. On the way, they’d stop in Fresno for a break and a snack. The 24-year-old Lyles College of Engineering senior said Fresno has become more than just a pit-stop – it’s her home away from home.

Hurst discovered her passion for electrical engineering at a young age when her mother became a realtor.

“As a single mother, she knew she needed a career that allowed flexibility,” Hurst said. “She would be there for me and my siblings, however, she also worked nearly 24-7. And for myself, as the youngest, it often meant I worked those hours too.” 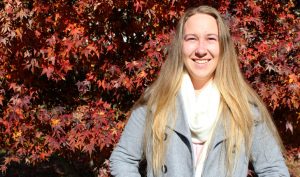 Hurst said when she would join her mother at work, she found herself tinkering with the wireless security key fob devices that unlocked the doors. Keeping her busy and fulfilling her curiosity, she eventually moved onto computers and even disassembling and reassembling her mother’s digital camera.

“In watching my mother work with this technology, I began thinking about what little changes I could make to these devices to make her life easier,” Hurst said.

By the time Hurst was in high school, the downturn of the economy had begun and, as was the case for so many families, it was a difficult time financially.

“Despite her commitment to her career, my mom admitted to me that she couldn’t support me through college as she had my siblings, so, it was up to me to figure out how to pay for college. I knew then that my best hope was to receive scholarships that allowed time to focus on my studies.”

Hurst began applying for and touring colleges even though she did not know how she would pay for college. When she visited Fresno State, she met Dr. Gregory Kriehn, an electrical and computer engineering professor and the director of the Lyles College of Engineering Honors Program. She observed his class participating in experiential science, technology, engineering and mathematics (STEM) activities.

“Having grown up in a small town, I knew this was the type of environment I wanted to be in,” Hurst said. “Fresno State’s faculty were incredibly welcoming and exuded excitement. This felt like the kind of place where I would be able to engage directly with professors and not become another body filling a seat in massive lecture halls.”

The Lyles College of Engineering Honors Program is funded in part by the  Husband-Boeing Scholarship – established by Boeing Company to honor the late Fresno State alumnus Col. Rick Husband, who had served as commander of the ill-fated Columbia Shuttle. The program emphasizes academic excellence, leadership, service, global perspective, entrepreneurship and innovation. It provides qualified students from Central California full tuition for four years to pursue and complete their education in engineering or technology.

“I was encouraged to apply to the honors program and the next semester I began my educational journey,” Hurst said. 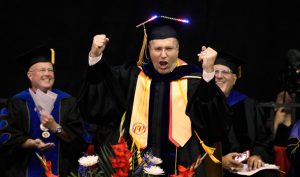 Kriehn recruited her for the Unmanned Systems Research Team and she joined the Institute of Electrical and Electronics Engineers student organization. Soon after, she traveled to the Society of Women Engineers conference where she met industry professionals and attended a massive career fair.

“Having been involved throughout my freshman year and having experience working with different technologies and systems, I entered the conference feeling prepared to speak with recruiters from top companies,” Hurst said.

She interviewed with Toyota Motors of North America and was accepted an internship within a week of the conference. Since then, Hurst has interned with Toyota four times — twice with its electrical systems group and twice with the fuel cell vehicle group – in both Michigan and California. She also was awarded a U.S. patent for “Vehicle attachment point positioning in relation to a vehicle environment.”

“Fresno State provided me with the tools I needed to be successful as an intern within such a major company,” Hurst said. “My feeling that Fresno became a home away from home, dually applies to this school. My roommates at the time said that I spent more time at school than our apartment. This is common with all engineering majors, and is a testament to the dedicated students of the Lyles College of Engineering.”

Hurst, who will graduate from Fresno State at the Lyles College’s fall commencement ceremony from 9:30 to 10:30 a.m. Friday, Dec. 20 at the Satellite Student Union, has accepted a full-time position as a hardware engineer with Cisco System, Inc. in San Jose.

“Although this company is not located in Fresno or the Central Valley, I will be working to keep the Central Valley and beyond connected. Taking a page from President [Joseph] Castro’s book, I will be looking to enact bold development as I tackle my new role,” she said. “I can only hope to have left some impact on the Fresno State community as it has left upon me.”

Hurst will serve as the student speaker at the ceremony honoring 83 engineering and construction management graduates and their families and friends.