Standing in the sand looking south, it looks like many beach towns around the world. The deafening slow pulse of the ocean overwhelms the voices of the hundreds of people and the squawking seagulls. A boardwalk separates the beach from the seaside shops, hotels and homes, which, looking north, abruptly ends in the Friendship Park. A monument of colorful oversized letters spell “Tijuana — Aqui Empieza la Patria.”

It is the beginning and the end of two homelands; two corners which make up an international border. A place where the separation of land and sea is crossed by steel slats joined as one to create an impenetrable border wall.

Presented by the Department of Modern and Classical Languages and Literature at Fresno State and Club Austral, Fresno State alumna Lizbeth De La Cruz Santana will hold two public lectures on “The Playas de Tijuana Mural Project” on Monday, Feb. 10 at the Henry Madden Library (Room 2206). The English presentation will begin at 1 p.m. followed by a 2 p.m. Spanish presentation. It will cover the development of The Playas de Tijuana Mural Project, which is part of her U.C. Davis doctoral dissertation. Parking is $5 in lots P27 or P20. The event is sponsored by the College of Arts and Humanities, Center for Creativity and the Arts, Associated Students, Inc. and the Department of Classical Languages and Literature.

In November 2016, Santana found herself standing on the Playas de Tijuana looking at the wall. Just months earlier, she received her master’s degree in Spanish from Fresno State and was now beginning her doctoral program at University of California, Davis.

“I still didn’t know whose faces and stories were going to be selected as part of this mural because doing this first visit to Playas de Tijuana in November of 2016 I was just learning more about the Humanizing Deportation project and the DACAmented Without Borders digital storytelling project was not yet in existence until later that year in December,” Santana said.

The vision that began to take shape was a collaboration of artists and storytellers, many of whom are deportees themselves and shared a desire to communicate the message of unethical treatment of childhood arrivals through deportation.

“I feel like art really communicates and has a very special way to create consciousness in people,” Santana said. “I always believed that the best possible way to speak on the violation of human dignity and human rights on childhood arrivals by U.S. immigration laws and our criminal system could be through this medium.”

For the next three years, Santana worked on the Humanizing Deportation archiving project. During her fieldwork in Tijuana, she was able to make connections and friendships that ultimately made her vision possible.

In August and September, Santana, artists Mauro Carrera and Enrique Chiu and a small army of collaborators descended on the Playas de Tijuana and began applying the mural to the steel slats which make up the border wall. The local impact of the mural was immediate.

“Visitors would approach us and we would engage in very fruitful and sometimes very emotional conversations in regards to their own experience and migration to the U.S. as children. Some would speak on the experience of their own deportation or the deportation of a loved one. For me, that really made me feel that all this hard work and all the planning that went into developing this mural was more than worth it.”

Santana was not the first person to apply art to the wall at the beach. Archived photos show a rich tradition of graffiti charged with emotional messages and images have appeared on the wall in years past. What sets Santana’s project apart is the inclusion of QR codes that link the faces in the murals to their stories. Combining the art with a digital humanities archive allows the faces to come alive and for people’s full stories to be shared in their own words. 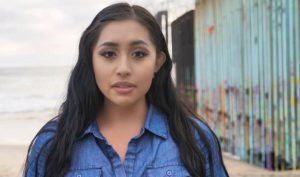 “The QR codes host stories from both the DACAmented DREAMs Without Borders and Humanizing Deportation archives. These QR codes were only possible because of the existence of these two platforms as these have invited narrators to share their stories since 2017,” Santana said. “In regards to the Humanizing Deportation archive, this archive now hosts nearly 300 narratives from about 250 narrators. It is the largest public web access archive on deportation in the world.”

The impact of the mural and the video archive has since reached far beyond Tijuana. The story has gained international coverage beyond just the United States and Mexico — or even English and Spanish news outlets.

“We also had coverage on the mural in French media and also in Brazil and then other countries like Japan that wanted to shed light on the artivism aspect of painting the U.S.-Mexico border wall,” Santana said.

As she wraps up her doctoral work, Santana is now working on a documentary of the mural project. She is also in the beginning stages of co-developing a “Migri Map” app — a mobile humanitarian guide of services for my migrants, deportees and asylum-seekers in Tijuana.