Editor’s Note: Despite the necessary adjustment to virtual instruction for part of this semester, more than 6,000 talented Fresno State students will earn their degrees in May and move on to become the next generation of leaders in the Central Valley and beyond. While every hardworking graduate deserves to be recognized, for the rest of the semester we will be sharing the inspiring stories of graduates like these who have achieved at the highest levels or have overcome remarkable challenges. As University President Joseph I. Castro previously announced, the University looks forward to celebrating all of its deserving graduates at an in-person ceremony at a later date when it is deemed safe to do so.

With future professional goals that include teaching, traveling, community organizing, publishing their own books, and more, the power of writing and literature is alive and well in these 2020 graduates of the Fresno State English Department. 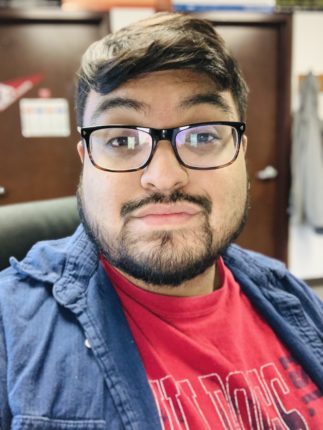 In fall 2018, they landed a student assistant job in the Creative Writing Program office, which included work on The Normal School literary magazine and at English Department events. The opportunity immersed Avelar in the Fresno writing community and introduced them to professional publishing and editing.

In summer 2019, with support from the College of Arts and Humanities Dean’s Council fund, Avelar earned a prestigious internship with Milkweed Editions, a highly regarded nonprofit press in Minneapolis, Minnesota.

“The internship is a competitive one,” Avelar said, “and when I applied for it, I was having a hard time within the English major. The experience of working with Milkweed, working in the book industry, was what I needed to make myself sure of what I wanted to continue to do with my life. When I came back to Fresno, I knew that more than ever that I needed the support of people who love me and the creative work that I do.”

Avelar has enjoyed spending so much time with the inspiring people on campus, most notably with peers in the Chicanx Writers and Artists Association student organization, and with Dr. Melanie Hernandez, a specialist in African American and Latinx literature, who became Avelar’s closest faculty mentor. The support encouraged Avelar, a first-generation college student, to present an experimental poem from a collection in progress at this year’s Undergraduate Conference on Multiethnic Literatures of the Americas.

“These people and the time I spent with them made the past year especially beautiful to me,” Avelar said, “and I cling to that in the face of all of the uncertainty we now face.”

Avelar will study poetry this fall in the Master of Fine Arts program at UC Riverside. They want to write “speculative, queer, Latinx poetry collections and space operas.”

“I want to run a literary magazine, run a press, design book covers, design books, work with writers and readers and artists,” Avelar said. “I want to be living in and surrounded by art.” 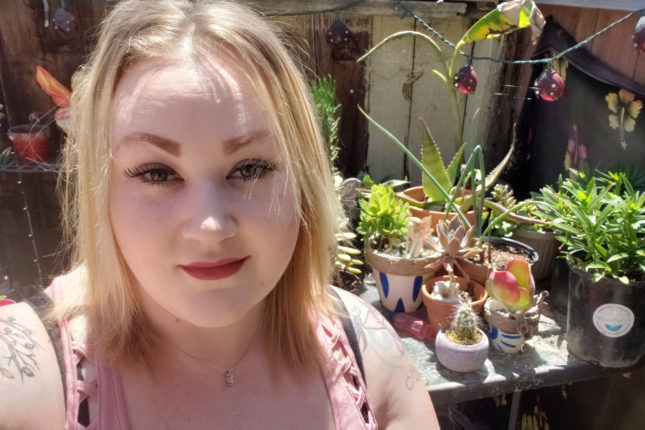 Jessica Hallstrom has loved reading all her life, and she often turned to literature and comic books for comfort while struggling with clinical depression in her late teens and early 20s.

But when she was diagnosed with leukemia, writing and drawing stories became her absolute outlet for expression.

“When I became sick, I didn’t have the strength to do anything but lay down,” Hallstrom said. “My dad began to read me Lewis Carroll’s ‘Through the Looking Glass,’ and I was able to be transported somewhere else.”

Carroll’s classic novel, the sequel to “Alice’s Adventures in Wonderland,” sends the reader into a fantastical world, as the heroine Alice climbs through a mirror into a world she cannot yet see. As illustrated by John Tenniel, Alice’s adventures with the Mad Hatter, Tweedledum and Tweedledee, and the nonsensical poetry of “Jabberwocky” spring to visual life, leading readers of all ages to question what they believe about logic and language.

Years later — thinking about her time with her dad, Alice, and the looking glass — Hallstrom wrote, drew, and handprinted her own eight-page comic book about her battle with leukemia and depression. Someday, she said, she would like to try to write a memoir about her experiences, based on her graphic chapbook.

“It’s difficult to describe why putting pen to paper felt so relieving,” she said. “Studying literature, to me, is one of the greatest decisions someone can make. There are thousands of lives to live, through the leaves of books. Writing is an extension of the self; so when you write, you must write with passion.”

Hallstrom credits faculty Chris Henson, one of the English Department’s specialists in American literature, for encouraging her development as a literary scholar. After taking Henson for each of the three American lit survey courses, Hallstrom presented a research paper at the Undergraduate Conference on Multiethnic Literatures of the Americas, advocating for more Asian American literature in K-12 classrooms.

A December 2019 graduate, Hallstrom has entered the single-subject English teaching credential program, with hopes of soon becoming a high school teacher. She is doing her initial student teaching at La Joya Middle School in Visalia. At some point, she would also like to pursue a Master of Fine Arts degree in creative writing.

“Once I get my MFA, I want to travel the world and write for at least a year, so that I can enjoy some more life experiences,” she said. 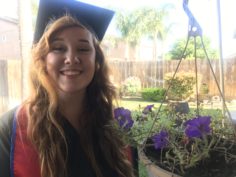 Like many creative writers that focus on writing fiction, Bekah Izard wants to make books that tell the stories that have been playing in her head for years, and then share with the world.

Izard, a first-generation college student, likes to pull inspiration for her writing from various mythologies, in order to celebrate how the human mind can explore real-life issues through worlds of fantasy. Her current project, which she hopes one day can become a book series or graphic novel, focuses on one heroine’s struggle for agency over her own body, within a magical-realist world that reflects our own.

At first, Izard felt sheepish about a career goal of wanting to write fantasy books. But she was drawn to them, and she keeps following her instinct.

“There are so many genres from so many time periods and you do not have to be interested in what people think of as ‘scholarly’ literature to be a successful scholar,” she said. “You have to seek out what you find cool and inspiring and stick with it, and you’ll be all the happier.”

Izard credits her experience in the College of Arts and Humanities Honors Program as being pivotal in allowing herself to seriously pursue creative writing within her English degree.

“Being able to study and reflect on the fantasy elements within Celtic mythology has only made me more confident in the prospect of pursuing a writing career that incorporates my love of fantasy,” she said.

Izard will study creative writing this fall in the Master of Fine Arts program at Chapman University, in Orange County.