Home » Dreamers are hopeful for the future
Previous Next

Gaby Encinas was just as surprised as she was ecstatic when she learned of the Supreme Court’s June 18 ruling that the Trump administration could not immediately end the Deferred Action for Childhood Arrivals (DACA) program.

The program, established in 2012 under President Barack Obama, protects undocumented immigrants (Dreamers), who were brought to the U.S. by their parents as children, from deportation, and allows them to work legally in the U.S.

The ruling was surprising to many, including Encinas, Fresno State’s Dream Success Center coordinator, who had braced for the worst.

“I saw the announcement, and I was very surprised because we were not expecting that ruling. So the minute I saw it, I started contacting the attorneys we work with to make sure I was reading it correctly,” Encinas said.

The ruling affects an estimated 600 students at Fresno State who visit the center to receive counseling and academic advising.

“We may not have won the war, but we’ve won a battle so we should be celebrating that we’ve won a portion of it,” said Maria Zamora, a Dreamer studying criminology.

Zamora said the possibility of DACA ending was frightening and confusing to her. She relies on the Dream Success Center for information, and she said knowing Fresno State has a significant number of Dreamers who have services available to them gives her hope that she will be able to obtain her degree and work in the community.

“For me, it is important to look at issues that our immigrant students largely face, specifically those that are of Latino heritage, and even more focused on those that are largely undocumented because their struggles are very particular and their activism and their campaigning has been so important,” Macias said.

Macias, too, was surprised to hear about the DACA ruling, and he said the future of DACA is still uncertain so it’s important to be educated on the topic even for those who are not directly affected by the ruling.

“Oftentimes in our communities there’s a lot of misinformation. So if we are able to, as professors, relay reliable and factual information to our students, they can spread that informed message in various communities,” Macias said. 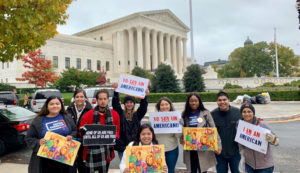 In November, history graduate Emily Rivas (left) traveled to Washington, D.C to march in front of the U.S Supreme Court during the DACA oral hearings.

History graduate Emily Rivas was not a DACA student but is involved in the national organization Define American. In November she traveled to Washington, D.C to march in front of the U.S Supreme Court during the DACA oral hearings.

“In that 23-hour trip, we made so many connections, met so many people, heard so many stories. And I know I left there as a young Latina woman feeling empowered and feeling like I could take on anything in this world, and I can’t imagine what DACA recipients are feeling today,” Rivas said.

As an Associated Students, Inc. senator, Rivas was an advocate for immigrant students. In the spring semester, ASI passed a memo to give $25,000 to the Dream Success Center to be used for services to undocumented students including DACA recipients.

“I feel like being in student government, being allies and putting in the work is definitely an exciting moment that many of us are very humbled at the fact that work does pay off, and, even when you feel defeated, there are those glimmers of hope. And although there’s so much work to be done, I think right now we’re reveling in it, how amazing it feels.” Rivas said.

By Lucero Benitez|July 8th, 2020|Categories: CAMPUS/COMMUNITY, PRESS RELEASES|Tags: Dream Success Center|Comments Off on Dreamers are hopeful for the future