Scott Peters used his marketing degree and business education to kickstart his entrepreneurial career in hopes of aligning his luxury footwear company amongst some of the largest fashion houses in the industry.

Peters, who graduated from Fresno State in May, has always been interested in fashion and owns a collection of boots, but he found his traditional cowboy boots were incredibly ill-fitting. He sought a solution. He took his knowledge from an apprenticeship at a local leather and footwear repair shop and set out to make the nicest pair of boots possible.

There were many days of designing and consulting with his professors regarding his business and Peters took advantage of Fresno State’s many resources whenever he could. He started making significant progress toward his entrepreneurial goals as he approached graduation. 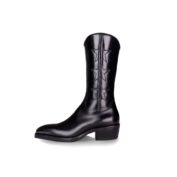 After a year and a half of trial and error and bouncing through multiple manufacturers, Peters was finally satisfied with the final sample design. He said the design was made using the finest materials and techniques available to improve the fit of cowboy boots. He now has a team in Italy that produces his footwear, and he runs his Sebastian Boot Company from Fresno.

Sebastian Boot Company takes a modern approach to traditional western footwear, Peters said. Its proprietary sizing scale allows customers to size their feet and legs independently from each other to create a tailored fit that otherwise would require a custom-made pair of cowboy boots. The slim fitting boots accommodate foot and leg combinations of all sizes. Sebastian Boot Company’s Desperado boot is made from French box calf leather and is handmade to order in Italy using the bespoke shoe making processes.

Peters, a Fresno native who graduated from Clovis West High School, said he always did well in classes and found value and felt challenged by the real-world projects in Fresno State’s Craig School of Business.

As a student, he worked on a project to create a marketing plan for Goodwill of San Joaquin Valley, a local non-profit organization. Other courses prepared Peters by giving him the opportunity to practice his marketing decisions on a business simulation program. It was through these learning experiences that Peters said he found the confidence in his ability to start his own business.

“The real-world experiences gave me insight to what that marketing industry is like outside of a classroom,” Peters said.

For Fresno State students who have a business idea, the Craig School houses the Lyles Center for Innovation and Entrepreneurship, a nationally-ranked center with a track record of inspiring students. The Lyles Center uses its strategic position to leverage resources from the community to assist innovators and entrepreneurs in the development of their ideas into a business.