Dressed up in black, with a bowtie, burgundy jacket and matching burgundy Pumas, author and Fresno State alumnus Anthony Cody waited with anticipation in the virtual green room for the 71st National Book Awards to be announced.

From a beat-up laptop inside his Fresno home — nearly 3,000 miles away from the famed New York Public Library, where part of the virtual awards ceremony was being broadcast — Cody said on social media that he was “still coming into the reality that ‘Borderland Apocrypha’ is a finalist for the 2020 National Book Award for Poetry,” which is among the highest literary prizes in the United States.

By the end of the night, Cody learned that his debut poetry collection finished as a finalist for the annual award, making him the most highly honored writer in the 25-year history of the University’s Master of Fine Arts program in creative writing.

As one of five finalists, Cody will receive a $1,000 prize and a bronze medal from the National Book Foundation. The poetry award — given Nov. 18 to author Don Mee Choi for the book “DMZ Colony” — was determined by a panel of literary experts, chaired by author Layli Long Soldier. Awards were also given in fiction, nonfiction, translated literature and young people’s literature.

After the awards ceremony, Cody said on social media that he was deeply grateful to share space on the national poetry stage with Choi and all the finalists and long-listed writers.

“I am filled, in this moment, with euphoric gratitude,” he said.

Cody, a Fresno native, graduated with distinction in May from Fresno State’s graduate creative writing program. He was selected as the Graduate Dean’s Medalist for the College of Arts and Humanities. Cody also holds a bachelor’s degree in liberal studies from Fresno State.

Raised off Belmont and Maple avenues, Cody grew up in the shadow of a freeway 180 off-ramp, in a neighborhood now dotted by the vacant lots of failed industries. A McLane High School graduate, he continually wondered if there was a place for him in higher education — let alone in literature and poetry.

“I have been educated and nurtured in parts of southeast Fresno that people are more used to seeing on the news for poverty or crime, or would prefer altogether ignore, forget or very literally, illegally dump their garbage,” Cody said.

In this way, the poet said, he sees being honored as a National Book Award finalist as an opportunity to help amplify and support other poets and writers in the Fresno community, as well as writers across the Americas and beyond.

“Books can sound like you, exist in new forms and tell the stories and histories that are true to your imagination,” Cody said. “As such, it is my hope that this becomes an opportunity to invite more emerging poets and writers from Fresno, and nationally, into the literary conversation.” 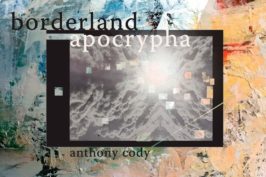 “Borderland Apocrypha” — one of only two debut books among the 25 National Book Award finalists — won the 2018 Omnidawn Open Book Contest and was published in April 2020. The book continues to attract wide acclaim, including from fellow Central Valley author Juan Felipe Herrera, the U.S. poet laureate emeritus and Cody’s frequent collaborator in the Laureate Lab Visual Wordist Studio inside the Henry Madden Library on campus.

“This one-of-a-kind book settles all cases against all border-crossers,” said Herrera, the Fresno State professor emeritus of Chicano and Latin American studies. “It is possible: a brave, bold syntax, an unseen intelligence of ourselves, a new America. Bravo for [Cody’s] compassionate and brutal time-spaces, this bristling land voice — an exemplar of a bursting literature. Everything starts over now.”

Cody’s poetry is challenging in multiple ways. It reinvents itself and shapeshifts in content, form and space, across the book’s margins and across the page.

From the publisher’s description of the book:

“The 1848 Treaty of Guadalupe Hidalgo marked an end to the Mexican-American War, but it sparked a series of lynchings of Mexicans and subsequent erasures, and long-lasting traumas. This pattern of state-sanctioned violence committed towards communities of color continues to the present day. ‘Borderland Apocrypha’ centers around the collective histories of these terrors, excavating the traumas born of turbulence at borderlands. … The poems ask the reader to engage in searching through the nested and cascading series of poems centered around familial and communal histories, structural racism and natural ecosystems of borderlands. Relentless in its explorations, this collection shows how the past continues to inform actions, policies and perceptions in North and Central America.”

In addition to being a finalist for the National Book Award, Cody is one of only three Master of Fine Arts alumni in the program’s history to publish their debut book before finishing their graduate degree. He is also a CantoMundo fellow, an associate poetry editor for Noemi Press and a member of the Hmong American Writers’ Circle.

“The end result will show us all that award-winning writing comes from marginalized people and places not historically lauded or given access to publish,” Cody said. “Excitingly, I think the future of poetry and writing will have voices from Fresno for years to come.”

Alumni from Fresno State’s English Department who have also earned national literary honors in the past 25 years include: