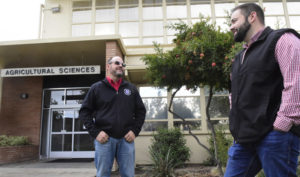 When student Kevin Magill walked into Dr. Steven Rocca’s office in the summer of 2017, the Fresno State agricultural education professor was a little surprised to see someone wear medical scrubs to his first advising appointment.

Magill, a local physical therapy assistant, had rushed straight from work. The Fresno native had already received his kinesiology degree while playing baseball at Fresno Pacific University, and now he wondered if it was too late to start over and become an agricultural education teacher.

Rocca patiently went through the long list of requirements step by step, and waited for signs of hesitation.

“You don’t see something like this very often,” Rocca said. “He would have to juggle a full academic load and a busy work schedule for three to four years, and it can be pretty exhausting, not to mention the extra cost. Most people would be cautious to make such a switch when they had already finished their degree and had a job. Not Kevin, he was ready to attack the challenge immediately.”

Magill needed to enroll in community college as soon as possible and start taking a long list of agricultural classes. He would also need two years of agricultural work experience and two final semesters of unpaid student teaching.

However, for Magill, who already needed two more years of college to become a licensed physical therapist, it seemed like a minor trade-off for the career path he was truly drawn to.

The notion to switch had been planted long before thanks to his father, Paul, who has taught agricultural education at Fowler High School since 1996. Since kindergarten, the younger Magill had loved tagging along to FFA events and to work on projects at the high school campus farm each weekend and over the summer.

Now, Magill is among 17 students finishing their teaching certificates this fall, and part of a group of 42 certificate students overall in 2020-21. That total is far bigger than any other credential program in the state and it is Fresno State’s largest class ever in the program.

The 27-year-old Magill wrapped up his student teaching at Golden Valley High School in Merced after completing his agricultural education degree coursework at Fresno State this past spring. He is now the fourth Fresno State graduate from his family with his mother (Sharon), brother (Chris) and sister (Emily) preceding him.

When weighing his initial college choice, athletic scholarships were a deciding factor, so he chose to attend Fresno Pacific and remain near family and friends who had cheered him on as a first-team all-state outfielder and quarterback in high school.

That choice paid immediate dividends on the diamond, and he was a starter in the outfield as a freshman in 2012. Two years later, he helped the team win the National Christian College Athletic Association world series title in 2014. However, his career also saw him miss two full seasons because of injuries and surgeries that required months of rehabilitation.

That same dedication, honed from years of playing sports, came in handy after his initial meeting with Rocca.

He walked out of the office with a list of suggested classes to take at Reedley College, and he enrolled that week. In his first week of classes, he asked his integrated pest management teacher about campus farm work opportunities. Soon after, he started working in its agricultural operations unit and helped manage its irrigation systems.

Each semester afterward Magill stayed in touch with Rocca and cross-checked his course schedules at Reedley and the College of the Sequoias with Fresno State program requirements.

After passing the California Basic Educational Skills Test (CBEST) with only a day’s notice to prepare, he started taking classes at Fresno State in January 2019. At that point he worked at Takao Nursery in Fresno, and later began work as a campus farm student assistant at Fresno State in its agricultural operations department.

Since then, he maintained a 4.0 average in his agricultural classes, including three taught by Rocca — introduction to agricultural education, agricultural resources and computer technology, and agricultural teaching methods.

“In that first meeting, Dr. Rocca answered every question and gave me so much confidence that when I walked out I was convinced that this was the right thing to do,” Magill said. “He has continued to be there as a source of support. In his classes, I’ve always identified with his emphasis on the importance of family and helping others. He is very professional yet very relatable, and someone you can trust and emulate.”

Even more of a coincidence, the younger Magill had helped Rocca’s father, Alvin, in rehabilitation visits at his physical therapy clinic before their first campus meeting.

Since then, the main obstacle for Magill has been the COVID-19 pandemic, which has limited access to students, FFA activities and student projects that are vital experiences in the student teaching process.

This fall, his busy student teaching schedule at Golden Valley High has included an hour drive each way to Merced to teach his classes virtually and additional nights and weekends to prepare his lessons.

“I came into this last fall a little overwhelmed with a lot of things,” Magill said. “Not being around the students has been hard, and there’s stress from the workload, expectations about the future and how the pandemic might affect it. I have a lot of people to thank for their support, like my fiancée, my family and my fellow teachers at Clovis East and at Golden Valley and the department chair (Vikki Dompe) for giving me so much support. Agriculture is such a hands-on teaching field, but at the same time the field is constantly adapting as the industry does.”

Part of his teaching support network at Merced are faculty members Cody Jacobsen and Madison Zittel, who are providing new insight.

Magill has used their assistance in designing his agricultural earth science and agricultural biology classes. He has added other valuable skills by creating online videos, software, PowerPoints and worksheets and developed special projects in ornamental horticulture and landscape like growing and propagating plants and succulents.

Despite the challenges, he noted that virtual education methods have helped students become more organized and have provided online tools that they can easily refer back to.

“It’s really rewarding to see the students thrive when they’re challenged,” Magill said. “As a teacher, a lot of the software I use now I first used in Dr. Rocca’s computer technology class. Those experiences have been a foundation, and little did I know how important they would be.”

Rocca is not surprised of Magill’s quick transition to the new environment.

“Our teaching certificate students are our future since they can integrate technology they’re already familiar with into their passion for agriculture, which is something our profession needs,” Rocca said. “There’s been a bigger demand than supply in California for new ag teachers since I can remember, and with Kevin’s dedication and experience he can really help students learn about the wide variety of careers available in our industry.”