The eight schools and colleges at Fresno State, along with the Division of Student Affairs and Enrollment Management, each selected an outstanding student to honor as part of the class of 2021 Graduate Deans’ Medalists. 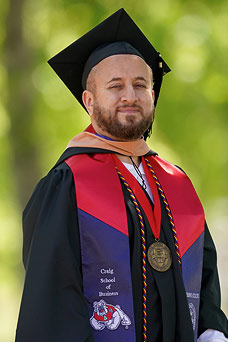 Mustafa Ali, of Hanford, earned his executive MBA with 4.0 GPA. He previously earned a B.S. in business administration, real estate and urban land economics, at Fresno State. Ali, who was born in the United Kingdom, became a young entrepreneur when he moved to the United States. But after 15 years as a business owner, he longed for more. He wanted to set an example for his children and work to achieve the dream of his immigrant parents from Yemen — to get an education. With the skills he learned, Ali started a new real estate investing business and made adjustments to his portfolio that helped him see more professional success. It has also freed up more time for him to spend with family and to give back to the community. He volunteers with the Hanford Police Activities League Boxing program and plans to participate in the tutoring program at West Hills Community College. 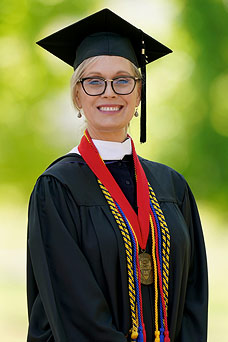 Traci Arbios, of Clovis, earned her M.A. in history with a 4.0 GPA. She previously earned a B.A. in dramatic arts from the University of California, Davis. In 2015, Arbios suffered a cardiac arrest, caused by an unknown genetic disorder, that landed her in a San Francisco hospital for a possible heart transplant. She lost oxygen to her brain for 20 minutes. The road to recovery took three years, several operations, physical and speech therapy and a look at new opportunities. After a career spent at The Fresno Bee, Arbios enrolled at Fresno State where she served as a teaching assistant, joined Phi Kappa Phi National Honor Society and was honored with the Department of History’s Outstanding Thesis Award for her research about the gender integration of The Fresno Bee’s newsroom and the effects of the broader Women’s Liberation Movement on women in the media workforce. She hopes to begin a second career teaching in college. 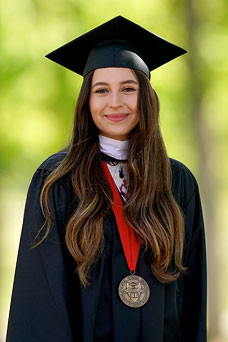 Marisol Duran, of Madera, earned her M.A. in general/experimental psychology with a 3.89 GPA. She previously earned a B.A. in psychology from Fresno State. Duran, a first-generation college student, has always been fascinated with what goes on in the brain and was hooked on the complexities of neural processing after her first neuroscience class. She served as a research assistant in several research labs throughout her years at Fresno State. In the Miller Lab, which centers on neuroimaging and meta-analytic work, Duran analyzed functional magnetic resonance imaging data that enabled her to look for anatomical and physiological differences between those with depression and a control group. She received a Bridges to Doctorate fellowship and has collaborated with researchers from other universities. Duran has applied to several Ph.D. programs. She plans to get her doctorate and work as a researcher and professor. 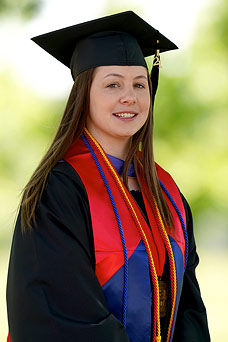 Sarah Garcia, of Turlock, earned her M.S. in criminology with a 4.0 GPA. She previously earned a B.A. in criminology and justice studies from California State University, San Marcos. Garcia attended a Spanish-English immersion program as a child that supported inclusion, diversity and multiculturalism. These values gave Garcia a deep understanding of structural inequities experienced by disenfranchised communities and instilled in her a desire to be part of social change. She worked as a resident director in University Housing for two years, helping to guide students through the COVID-19 pandemic and serving as a communication liaison between residents, staff and public safety officials on campus. Garcia was accepted to the University of New Haven, in West Haven, Connecticut, to pursue her doctorate. Her goal is to work for the FBI in the National Center for the Analysis of Violent Crime. 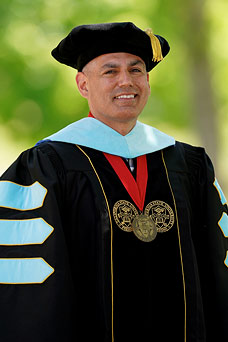 Hank Gutierrez, of Fowler, earned his Ed.D. with a 4.0 GPA. He previously earned a B.A. in liberal studies, a multiple subject teaching credential and a master’s degree in education and administration from Fresno State. Gutierrez has a long history of teaching and leading schools across the Central Valley with a commitment to diversity, equity and inclusion, along with the cradle to career pipeline. When he was principal of Fowler High School, he implemented leadership cohorts to increase support for students to obtain a diploma, reduce suspensions and participate in service-learning. Earning a doctorate has helped him unlock some of the answers to combating generational poverty for students and their families. In his current role as deputy superintendent with the Fresno County Superintendent of Schools, Hank recently created the rural schools teacher residency program, initiated behavioral threat assessments for all schools and looks to launch the Central Valley’s first African American teacher pipeline. 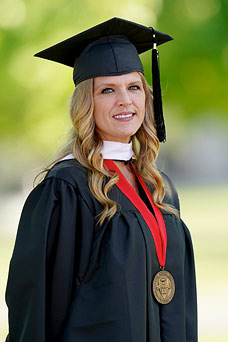 Mindy Ross, of Auberry, earned an M.A. in speech-language pathology, with a 4.0 GPA. She previously earned a B.A. in communicative disorders, speech-language pathology option, at Fresno State. Ross started her higher education journey later in life to show her two children the importance of education and that it’s never too late to do something new. She started at Oakhurst Community College, then transferred to Fresno State. While a student, Ross and her family were evacuated from their home during the Willow Fire (2015), Mission Fire (2017) and the Creek Fire (2020). Last year, she made sure to pack her school supplies. It was her last semester of graduate school and she was starting a clinical externship at Saint Agnes Medical Center. Ross only missed one night of her externship during the four weeks that she was displaced. She is now a language/speech specialist in the Clovis Unified School District. 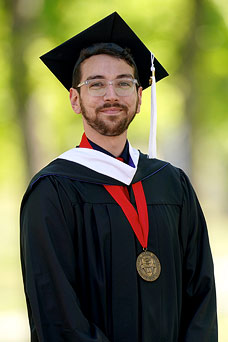