Home » From dad and mom’s school to law school; grad carves his own path
Previous Next

Misty Her remembers walking her son Ryan, then only 2 years old, from their apartment across the street from Fresno State toward the Kremen Education Building to meet her husband after he finished class.

She told Ryan that he could attend Fresno State someday.

She and her husband, Phong Yang, met at the University. She earned a degree in liberal studies. He earned a French degree. They got married, started a family and supported each other through master’s programs also at Fresno State — Her in school supervision and administration while Yang studied linguistics. 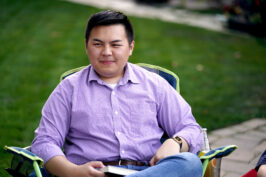 Fresno State was the obvious choice when it was time for Ryan to choose a college, he said. It was close to home, it has a good reputation and he could catch a ride with his dad, who works at the University.

While their Fresno State ties are strong, Ryan’s parents insist they never pressured him to become a Bulldog. Yang, now director of admissions and recruitment at Fresno State, jokes that he would have been the first to recruit his son. But their children, including daughter Grace who is a Fresno State sophomore, and youngest son Gabriel, a fifth-grader in the Fresno Unified School District, have the opportunity to go anywhere and discover themselves, their parents said.

Ryan graduates Fresno State in May with a degree in political science and a minor in philosophy. In the fall, he heads to the University of Nebraska for law school with a goal of working for an organization where he can defend First Amendment rights.

“These last two years went by really fast,” Ryan said. “I’m very excited to be graduating, particularly because I’ve been accepted to law school where the stuff I want to learn and what I want to work in will be at. Let me go, already!”

For Her, she still sees little Ryan.

“I feel like I just brought him home. I still see him as this little boy. I can’t believe that he’s graduating,” she said. “He’s worked really hard. He said, ‘I’m going to go and finish in four years’ and before you know it, four years is already here.”

Ryan grew up in his mom’s Fresno Unified classrooms watching her decorate the boards on the wall for her students. Then he watched her climb through the administration ranks to her current post as the district’s deputy superintendent.

Visits to the Joyal Administration Building at Fresno State, where his dad has worked mostly since 2000, were also frequent. He learned that the path next to Joyal was where his parents met as students at 6:30 a.m. so Yang could walk Her to class in the morning. But Ryan and his sister loved the iconic campus water fountain best; they liked to look for rainbows in the shooting water.

Nowadays, Ryan’s favorite Fresno State spots include the basement of the Henry Madden Library, where he studied uninterrupted before the pandemic. The top of the southeast side of the Peters Building is where he would catch the sunrise or sunset over campus while working for campus traffic operations. He chuckles and says he knows all the secret nooks and crannies on campus.

Ryan started his freshman year at Fresno State in the Air Force Reserve Officer Training Corps program with thoughts about going into law enforcement. But his path changed, and he considered entering the priesthood. Then he developed an interest in political science, specifically legal reasoning, argumentation and analysis. Critical thinking, he said, was one of the most important things he learned at Fresno State.

“If you’re going to college and not coming out with critical thinking skills, the ability to articulate and analyze your positions and to understand them, I think your time is wasted,” Ryan said. He rattles off names of professors who challenged him — Dr. Michael Becker, Dr. Jason Kissner and Dr. Yishaiya Abosch. Ryan encourages students to “put yourself in a position where you’ll be challenging what you believe.”

That passion led to many heated discussions at home with his parents, and on campus with other students where Ryan has served as president of the Students for Life organization the past two years.

“[My parents and I] talk politics and stuff all the time. I like to push discussion, push people’s buttons. It’s not personal, I just want to test your waters,” Ryan said. “It’s an interesting thing to practice. You see what people actually believe, especially with your parents, because these people raised you and you get to see what they actually think.”

Yang and Her know that having educators as parents can be overbearing. They have tried to overcome that by allowing each of their children to find their own way and to solve their own problems while instilling in them a love of education. School, they said, opens up the mind and shapes you into a critical thinker and a better person in the world.

“I hope wherever he goes … that he always remembers where he comes from and in the end, he goes out and makes a difference in society and in the world,” Yang said. “That’s what we ask for as parents. Whatever you do, go out there and be a good person and make a difference. I think Fresno State has provided that opportunity for him to find himself.”

Yang says Fresno State gave him everything — his education, his wife and his job. Now his two oldest children are part of the Bulldogs family.

Her admits that Fresno State wasn’t her first choice for college. She wanted to experience life outside of Fresno, but cultural norms at that time kept her close to home. The decision to stay was a blessing, she said.

“Sometimes certain things and people are put on a path because you’re just meant for other things,” Her said. “I ended up at Fresno State because I was meant to be at Fresno State and do what I needed to do and come back and be involved in the community the way I am.

“I hope, no matter where Ryan goes, I do hope that Fresno State has instilled enough in him that he comes back to this community to serve. It’s needed.”