About 60 family members, friends, faculty and staff gathered Friday evening, Oct. 8, in the Table Mountain Rancheria Reading Room of the Henry Madden Library for a reception and unveiling of a formal presidential portrait of Dr. Joseph I. Castro.

“It’s wonderful to see you here for this truly special and rare occasion,” current Fresno State President Saúl Jiménez-Sandoval said, introducing “the portrait unveiling of Fresno State’s eighth president — a president who made us proud of who we are as a university and empowered us to visualize how deeply we transform the communities of our fertile Valley.”

The unveiling was much more than a ceremonial tradition. It was also a chance to celebrate the Castros’ time in Fresno and with the University, a chance to bring things full circle and reconnect with cherished friends and colleagues.

“Our departure last December from Fresno felt very abrupt,” Dr. Castro said. “We could not adequately express our thanks to all of you for your support because of this crazy COVID thing.” His voice broke as he described how they left: “Amidst the most challenging phase of the pandemic when we quietly left University House on a dark, foggy morning on December the 30th; that was not so much fun to do that without saying goodbye.”

With full support of  President Jiménez-Sandoval, the Castros were welcomed to participate at the May commencement ceremonies, and, as Dr. Castro reflected, “We were able to complete some unfinished business with our graduates from 2020 and 2021. I appreciated that so much.”

“As nearly 70% of our students are the first in their families to come to college, I’m certain that his presence transformed access to our first-generation Fresno State students and confirmed the value of our degrees to the students whose families have a long tradition at Fresno State.  Indeed, I often heard Chancellor Castro declare, with conviction and resolve: There is talent in every household.” 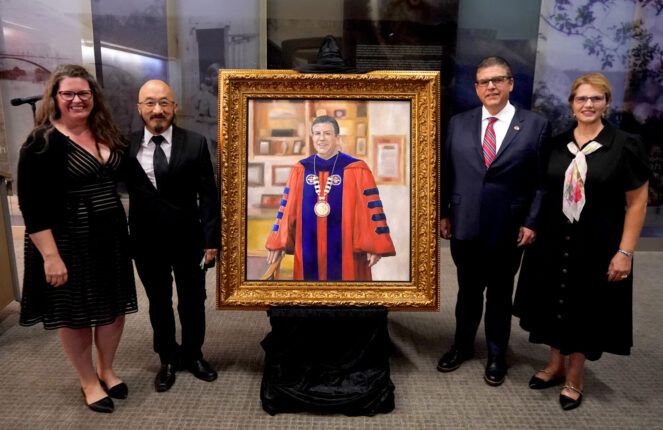 Ma Ly, a local artist since moving here in 2008, painted the 36-inch by 40-inch oil-on-linen canvas portrait, which shows Castro in regalia.

Ly spent about six months on Castro’s portrait, from January through June, working from several reference photos. Later in the process, the Castros met Ly at his studio/gallery Vernissage — right across from Fresno High School — to refine the portrait.

“I absolutely love it,” Castro said. “Mary is one of my most trusted critics, and she thought Ma’s work reflected perfectly my energy and personality as president. I hope it will play a small role in inspiring Fresno State students and others who see it to establish big and bold goals in their lives. After all, a kid from Hanford — and now a kid from Fowler with President Saúl Jiménez-Sandoval — have shown that it is possible to lead the largest and most consequential public university in the Central Valley.”

Born in Laos, Ly moved to France for 30 years after the Vietnam War before relocating to Fresno. In 2016, the Fresno Arts Council honored him with a Horizon Award, which recognizes people who have made significant contributions to the local arts scene.

Jim Yovino, superintendent of the Fresno County Office of Education and a friend of the Castros, recommended Ly for the portrait commission. Yovino had commissioned Ly to do portraits of President Barack Obama and First Lady Michelle Obama. Ly’s portrait work can also be seen at the Betty Rodriguez Regional Branch of the Fresno County Public Library, where his portrait of Rodriguez is on display.

The portrait will hang alongside paintings of the University’s other past presidents. Currently, these are featured along a back corridor leading to the Office of the President, with a timeline of University milestones.

Upon completion of the Lynda and Stewart Resnick Student Union next year, the collection of portraits will move to a public space in that building.

“I can only hope that my portrait of Dr. Castro will serve as a reminder of his contributions to Fresno State and also to inspire art students,” Ly said. “As a French-American artist, with this portrait, I leave a major legacy piece from my body of work in a prominent California university.”

Those attending the unveiling event also toasted Castro’s success with a new 2020 Chancellor’s Reserve Chardonnay ($21.95, available at the Fresno State Winery and the Gibson Farm Market).

“I want to thank my former Cabinet, as well as the students, faculty, staff, alumni and friends who supported Mary and me during our almost seven and one-half years of service at Fresno State,” Castro said. “It was an experience that we will cherish for the rest of our lives.”