At the core of his profession, Dr. Ramar Henderson sees himself as a healer – someone who is “courageous and intentional about collaborating with an individual who is hurt and devising a plan to become complete in the broken places.”

That’s why he started the Racial Healing Circle at Fresno State, to provide a dedicated space to help those affected by the pain of racism on psychological, spiritual, physical and emotional levels.

The monthly Racial Healing Circle will be held from 2 to 3 p.m. on Feb. 24 in the Thomas building (Room 109), and is open to Fresno State students, faculty and staff. It is one of a variety of events on campus this February in recognition of Black History Month.

Henderson, an assistant professor in the Master of Science in Clinical Rehabilitation and Mental Health Counseling at the Kremen School for Education and Human Development, was first introduced to racial healing circles at the Atlanta Association of Black Psychologists conference in 2011. He was fascinated by the concept and felt it was a vital component to helping heal racism. He said it was refreshing to encounter healers that were explicit about speaking to the psychological pain of racism.

Henderson strives to provide a safe space for individuals to talk about experiences with racism.

“It has been extremely beneficial to the individuals who have attended, many of whom have been looking for a place such as this for a long time, where they can openly share their traumas and struggles without fear of judgment,” Henderson said.

For example, some students have talked about how the lack of conversations around race and racism can make them uncomfortable, and they have discussed issues related to inequity in programming. 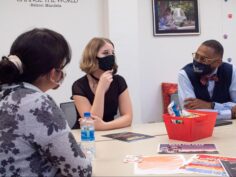 With newly emerging healing spaces available on campus, many individuals have begun to feel more accepted and embraced by the academic community, Henderson said.

The Racial Healing Circle began in October 2020, and, until fall 2021, was held virtually. It is now being hosted monthly, in person at the Cross Cultural and Gender Center at Fresno State.

Henderson facilitates the discourse and models how to provide appropriate support during the discussion while the attendees sit in a circle around him. Participants are encouraged and validated by their peers. Faculty and staff representation, along with peer support, can be therapeutic in a dedicated space such as this one, Henderson said.

For more information on the monthly Racial Healing Circle, or other events, visit the Cross Cultural and Gender Center calendar.