Dr. Robert R. Davila grew up amidst the agricultural backdrop of the San Joaquin Valley. Childhood was challenging for Davila and his seven siblings in their early years. As children of Mexican migrants who worked up and down the Valley picking crops and packing fruit, the children initially spoke only Spanish and began school later in childhood.

At 8 years old, Davila contracted spinal meningitis and, as a result, became deaf. His challenges became the catalyst to his esteemed career, which included serving as president of Gallaudet University — the premier higher education institution in the U.S. for the deaf and hard of hearing.

Today, Davila continues to support the deaf and hard of hearing community and the San Joaquin Valley through the Robert R. and Donna E. Davila Endowment in the Silent Garden at Fresno State. Named after himself and his late wife, Donna, the $250,000 endowment will support Spanish-language programming within the Silent Garden.

The Silent Garden in the College of Health and Human Services at Fresno State was created in 2008 to foster opportunity, understanding and awareness for the deaf and hard of hearing community within the Central California region. The program provides free educational conferences and resources to the community, as well as scholarships for deaf education and interpreting students.

“We are so grateful to have the support of Dr. Davila, who is an internationally recognized role model for Latino families with deaf and hard of hearing children,” said Dr. Denise Seabert, dean of the College of Health and Human Services.

The endowment will allow the Silent Garden to offer a Spanish-language conference every four years, bringing together world-class presenters representing a variety of experiences in raising and educating Hispanic children who have hearing loss.

“This generous gift will usher in advanced opportunities for the Silent Garden to flourish, while providing timely and important resources for Spanish-speaking families, as well as support for educational professionals in the field,” Seabert said. 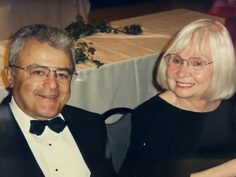 Hoping to give her son a better life and opportunities to thrive, Davila’s mother sent him to the California School for the Deaf, Berkeley nearly two years after his deafness was diagnosed. His mother did not have many resources for Davila at the time, and she was grateful to learn about the school through a friend.

It was at that time his love for academia was born. He quickly learned both English and American Sign Language, and thrived at his new school. After graduating with honors, he earned his bachelor’s degree at Gallaudet University; and later a master’s and doctorate degree in education from Hunter College and Syracuse University, respectively.

In 1989, President George H.W. Bush selected Davila as the assistant secretary of education overseeing the Office of Special Education and Rehabilitation Services. He was the first Hispanic and person of disability to hold this high-ranking position.

Davila has made an impact all over the U.S., but his strong roots called him back to the San Joaquin Valley and to the fields and orchards that served as the backdrop for his childhood. Known for its diverse population, the San Joaquin Valley is home to nearly 150,000 deaf children and adults who come from Spanish-speaking homes. Davila aspires to continue the Silent Garden’s goal of supporting culturally linguistically diverse minorities. This inspired his latest gift.

“I have not forgotten my early early years in the Valley and the impact my deafness had on my family,” Davila said. “Although times were difficult at first, my deafness eventually led to efforts that allowed my family to grow and become educated. The Silent Garden can offer that same opportunity for the many Spanish-speaking folks in the Valley who are probably raising and perhaps worrying about how to help their deaf children develop.”

At 9 a.m. on Saturday, Feb. 26, the Silent Garden will host its annual Lecture in the Silent Garden, bringing experts and leaders in the field, including keynote presentations from Sharon Grigsby Hill, director of the ASLI program at the University of Houston; and Dr. Christopher Tester, assistant professor of interpretation and translation at Gallaudet University. This year’s conference will focus on current trends in interpreting.

“The lecture will take a look at how both certified deaf interpreters and hearing interpreters work as a team providing the best services to clients everywhere,” said Dr. Paul Ogden, founder of the Silent Garden. “It will also look at how we can take the field of interpreting to new heights: providing new tools to the professional interpreters who are involved with their clients in increasingly complicated fields, such as technology, science, entertainment and the corporate community.”

The free, public lecture will be accessible nationwide via Zoom with sign language interpreting and closed captions provided. In addition to the keynote presentations, there will be two panels featuring professionals in the field. Resources for families, educators, practitioners, professionals and the general public will be provided.

To register or learn more about the event, contact Beth Wilkinson at bwilkinson@csufresno.edu.or visit: chhs.fresnostate.edu/thesilentgarden.