“Don’t wait! Come now! You’re badly needed. We don’t have anyone like you!” Dr. Martin Luther King Jr. asked the Rev. James Lawson Jr., then a student, after meeting him for the first time at Oberlin College in Ohio in 1957.

King had recently achieved success with the year-long Birmingham bus boycotts following Rosa Parks’ refusal to give up her seat in a segregated bus. He realized first-hand the impact of nonviolent action after the courts found segregated seating violated the 14th Amendment.

Lawson had just returned from India, where he had the opportunity to meet those who had worked beside Mohandas Karamchand Gandhi in the movement for India’s independence. King took notice of Lawson’s expertise in Gandhi’s methods of nonviolent action as an approach to fighting for justice and recruited him to play a more significant role in the nonviolent struggle against segregation.

By January 1958, Lawson was based in Nashville and was training civil rights activists such as Diane Nash and the late Congressman John Lewis in the art of disciplined and strategic nonviolent action. Gandhi’s methods inspired civil rights leaders to use nonviolence as their primary tactic throughout the movement.

“From my study of nonviolence around the world and the reading of Gandhi and his work in South Africa and India, I was absolutely convinced that we Black people could launch … a master movement that would begin this nation toward the goal of fulfilling its own best visions,” Lawson said.

On Feb. 18, Lawson joined a Zoom gathering with Drs. Ravi and Naina Patel, community members, campus leaders, students and faculty from Fresno State as they announced the creation of the “M.K. Gandhi Center: Inner Peace and Sarvodaya.”

Under the administration of the College of Arts and Humanities and directed through the Philosophy Department at Fresno State, the center will be located at the Madden Library. It was made possible by a generous gift of $1.5 million by the Ravi and Naina Patel Foundation.

“I am excited to be here for this most impressive and significant event. I think it’s one of the most significant things that can happen in a university,” Lawson said in his keynote speech on Feb. 18. “The world desperately needs the intervention that Gandhi made in the 20th century for our knowledge and for world uplift.”

Looking back, Lawson described the tone of the United States during segregation. Towns across the country often had “white only” signs and structures that greatly limited a Black person’s ability to move freely or earn a living. Severely outnumbered, fighting back against systemic racism did not seem to be a viable option. As Lawson recalled his mother’s mantra of “evil cannot be overcome by evil,” it was clear that another way to overcome was necessary.

“My country owes much to Gandhi because the movement of nonviolence from 1953 to 1973 began the process of opening up our nation to truth and justice,” Lawson said. “It took the nonviolent struggle to pull down the signs, begin to challenge the racist structures, the White supremacy presuppositions, and cause the nation to look seriously at ‘we hold these truths to be self-evident.’”

Nonviolence, Lawson said, is a science, is love, it is transforming and was vital to Dr. Martin Luther King’s action to gain civil rights for millions.

“I congratulate Fresno State for receiving this [Gandhi] Center,” Lawson said. “May it be the beginning of the academy recognizing … the science of nonviolence, the most significant intervention of the 20th century, and the one most urgently needed by all of us in the human race if we expect our living species to live and to flourish.”

Dr. Ravi Patel said he returned to South Africa years later with his children, and they visited the prison cell where Nelson Mandela was incarcerated.

“You could hardly put an entire human being to rest and sleep in a comfortable way. Mandela was kept there for years and years, and he came out of there with no hatred. It’s amazing to see how these teachings of Gandhi can transform individuals to the extent that they have no hatred no matter what is done. Total love and acceptance.”

“During the recent protests against racist violence, we realized that even though the cause was just, the methods to support it were not as effective or as long-lasting as they could have been. In my humble opinion, one of the reasons was that much of it lacked the principles of inner purity and service to humanity that Gandhi saw as a prerequisite to systemic change,” Naina Patel said.

This realization inspired the Patels to create theGandhi Center, focusing on Gandhian principles to inspire the next generation of leaders.

The Scholarship of Inner Peace and Sarvodaya 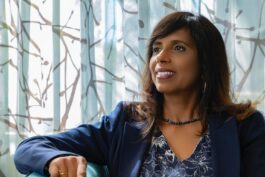 During the virtual ceremony in February, Fresno State President Saúl Jiménez-Sandoval named Dr. Veena Howard as the director of the Gandhi Center.

“Education in peace, project and service to others, and programs in developing inner harmony will contribute to our commitment to courageously educate the leaders of tomorrow and equip them with a socially-just vision for our whole community,” Jiménez-Sandoval said.

Howard is a professor of religious studies in the Department of Philosophy. She also serves as the Endowed Chair in Jain and Hindu Dharma and is a leading Gandhi scholar. Howard has published over two dozen peer-reviewed articles and book chapters in Gandhi studies and religions of India, including an Oxford bibliography on Gandhi. She is currently working on her second book on Gandhi and has been a featured speaker at various national and international conferences. In 2019, she organized Gandhi’s Global Legacy conference at Fresno State, which featured civil rights leaders and scholars such as Lawson, Dolores Huerta and Dr. Mary Elizabeth King.

“Peace leaders across the world recognize Mahatma Gandhi and his nonviolent direct action methods as tools for social justice and equality initiatives,” Howard said. “Gandhi has been a subject of scholarly commentary and a source of inspiration for activists who seek to confront structural violence, racism, oppression and inequality. In our own Valley, Cesar Chavez, Dolores Huerta and many others have used Gandhian methods to secure the rights of farmworkers. The monuments in Fresno State’s Peace Garden are a testament to Gandhi’s global impact.”

Dr. Robert Maldonado, chair of the Philosophy Department at Fresno State, said the Gandhi Center augments all the programs in the department, including general philosophy, religious studies, pre-law, peace and conflict studies and Middle East studies.

“A core commitment in the department is to studying and learning from a comparative perspective — exemplified in Gandhi himself,” Maldonado said. The Gandhi Center will allow us to bring our students, the broader University community and beyond a richer and more integrated experience that is profoundly personal and communal.”

Through the Gandhi Center, Fresno State will now be able to provide courses, symposia and other interactive events based on Gandhian principles “that will inspire future generations to take good action,” said Dr. Honora Chapman, dean of the College of Arts and Humanities at Fresno State.