Celebrating the Class of 2022
In the coming days, FresnoStateNews.com will highlight stories of inspiring students who will be graduating this spring. Commencement ceremonies for the University’s eight colleges and schools along with several affinity celebrations will take place May 20 and 21. Visit commencement.fresnostate.edu for more details. 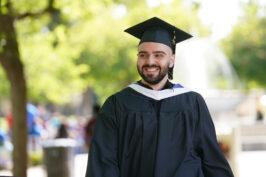 Arthur Khatchatrian still remembers the words his mother told him as she dropped him off for the first day of preschool.

“No matter what happens or what you go through, don’t forget that you are Armenian. Be strong, be fearless, but always be kind and work hard,” he recalls her saying.

Khatchatrian,whose parents immigrated from the Shirak Province of Armenia to the U.S. in the mid 1990s, took those words to heart. In fact, they served as motivation throughout his academic journey. As he prepares to walk across the stage at Fresno State’s College of Health and Human Services commencement at 10:15 a.m. on Saturday, May 21 at the Save Mart Center, those words will hold deeper meaning.

Khatchatrian is earning his master’s degree in communicative sciences and deaf studies, with an emphasis in speech-language pathology. He also holds the distinction of being a dean’s medalist nominee for the college.

“I would have never imagined that the shy child who did not speak English would be here 20 years later as a nominee of such high honor,” Khatchatrian said, still in disbelief.

From learning the complex nuances of the English language to helping others rediscover their own speech, Khatchatrian’s journey has been full of determination, but also a genuine desire to help others improve their lives.

When he arrived at Fresno State as a freshman, he did not have this career in mind. In fact, he didn’t even know it existed. Like many other students exploring higher education, Khatchatrian changed his major a few times before he discovered speech-language pathology from a family friend.

“I checked it out and took some introductory classes and ended up just falling in love with the field,” Khatchatrian said. “But I didn’t realize you had to go to grad school to become a licensed speech-language pathologist. So, toward the end of my bachelor’s degree program, I was like, ‘OK, well I guess I have to get my master’s now.’ I knew all along, this is where I needed to be.”

While pursuing his bachelor’s degree in the same field at Fresno State, and now through the two-year graduate program, Khatchatrian noticed a trend. He is the only male student in his graduate cohort of 20. Even at his clinical sites, he noticed how female-dominated the profession is.

According to a study published in Teaching and Learning in Communication Sciences and Disorders, males make up only 3.7% of the speech-language pathologist workforce.

Khatchatrian says this only makes his passion for the field stronger.

“I have no idea why more men aren’t in this field,” Khatchatrian said. “This is the coolest profession ever, but I will say that it’s pretty awesome that I’m surrounded by strong females in this field. As a male, I feel like seeing all these like powerful women just inspires me to do a better job.”

At Fresno State, Khatchatrian served as a student clinician for three semesters at the Speech, Language and Hearing Clinic, where he worked with children and adults to improve their language, cognition and social skills. Along the way, he participated in The LOUD Crowd, a group therapy program for individuals with Parkinson’s disease.

“I see Arthur as a blessing to his future patients and their families,” said Dr. Brooke Findley, assistant professor of speech-language pathology at Fresno State. “His thoughtful, compassionate nature will be of real benefit to him as he enters this helping profession.”

Khatchatrian’s heart of service extends beyond the clinic and classroom and onto campus. Throughout his time at Fresno State, he served as president, vice president and treasurer of the National Student Speech-Language-Hearing Association and even recently represented Fresno State at the College Bowl, held at the California Speech, Language and Hearing Convention in Pasadena, testing his knowledge and expertise in the field.

Khatchatrian’s dedication earned him many scholarships including the Trinity Health-Saint Agnes Medical Center Scholarship, specific for graduate students, which gave him the peace of mind to pursue his studies and extracurricular activities without worrying about the added expenses of books and other school supplies.

Now, as he officially heads into the profession, Khatchatrian said the intimate and personal nature of the speech-language pathology field is something he’ll cherish most.

“We get to help patients with their memory and thinking skills and even help them with swallowing and feeding techniques, which is something so sensitive and sacred to an individual,” Khatchatrian said. “These are things a lot of us take for granted, so being able to help our patients eat and drink again, or remember their granddaughter’s name, is huge. It’s everything.”