With 10 years of experience at several Central Valley wineries, Jose Betancourt is not the typical enology student – and he is proud of the equally unique Graduate’s Reserve wine that he helped craft this spring at the Fresno State Winery with four other seniors.

The limited-edition red wine blend was released in celebration of the class of 2022 in what has become an annual tradition. The first Graduate’s Reserve was introduced last year during commencement season.

This year’s blend features five of the graduates’ favorites from the campus barrel room — Alicante Bouschet, Barbera, Syrah and Tempranillo varieties from the campus and area vineyards and Zinfandel wine from Amador Valley in the Sierra foothills.

Each bottle is $12 at the Gibson Farm Market or online through the campus winery, which offers a 10% percent discount on purchases of three bottles or more.

For the first time, this same unique blend will be bottled with additional, special edition labels for two other California State University campuses – CSU Maritime and Cal State Stanislaus – and marketed to each of their graduating classes. The promotion was spurred after administrators from each university sampled and enjoyed Fresno State wines at a systemwide event this past year.

“This wine has been a nice addition to our portfolio,” Montgomery said. “It tastes fantastic and is another example of how we’re helping develop great winemakers of tomorrow. Our student assistants work exceptionally hard year-round to produce over 20 types of fine wines from all over California. With this one, they can take extra ownership, and it’s a perfect way for family and friends to toast the accomplishments of our graduates.”

Betancourt – who will participate in the Jordan College of Agricultural Sciences and Technology commencement ceremony at 2:45 p.m. Friday, May 20, at the Save Mart Center – worked with fellow Fresno State Winery student assistants Karley Curtis, Coultin Gist, Monica Gutierrez and Chanel Madison to create five options, which they used to select a final blend this spring with campus winemaker Tom Montgomery.

“This edition has our Saviez Syrah as its base, which is a grape that I have always liked and does well in our area,” Betancourt said. “It has a bold, fruity taste, yet not too spicy. The combination with the other varieties offers a complex taste and serves as a tribute to some of the finest wines the Central Valley has to offer.”

A student’s path to success 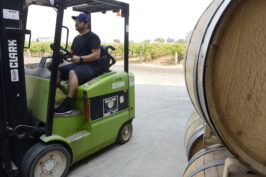 Fresno State graduate Jose Betancourt was eager to learn all aspects of the winery’s operation during his time as a student. (Photo by Geoff Thurner)

For Betancourt and other budding winemakers, this second vintage is a testament to each Fresno State student’s path to success.

Betancourt’s college degree path began at ITT Technical Institute in Clovis 2007, where the 32-year-old Parlier native studied computer science but left one semester shy of graduating with an associate’s degree.

A year later when he turned 21, he began working full-time from June to December each year at O’Neill Vintners and Distillers in Parlier, and took classes full-time each spring at Reedley College. Besides working there as a rack and blender, operator and production planner, he supported his wife, Destiny, who was finishing her nursing degree.

“Working at O’Neill was great because I learned so many important skills like managing additives, blending, filtering and even creating international shipments that have different quality standards,” Betancourt said. “My final year, I shifted to their office, which was enlightening from a client and order perspective, and reminded me my true love was working directly with the wines.”

After five years of splitting his year between the two locations, he focused on his studies at Reedley College full-time in fall 2018, earning his associate’s degree in communication studies in 2019.

During that time period, he added new skills working as a general winery worker for E. & J. Gallo Winery in Fresno, the largest family-owned U.S. winery, and at the tasting room at Fäsi Estate Winery in Friant. He started as a full-time student at Fresno State in fall 2019 and began working at the campus winery the following spring.

Sharing his challenges to inspire other students

The added hands-on skills from the Fresno State winery have given him new momentum to finish his degree, which he now realizes had been a challenge for him because of attention deficit hyperactivity disorder (ADHD). The condition, which was officially diagnosed in fall 2019, was confirmed by a 90-minute test that included puzzle sections, a survey and two sessions with a therapist.

“I’ve always had problems staying focused in class,” Betancourt said, “and the results showed I especially have issues with audio or verbal cues. Trying to sit in a two- to three-hour class can be hard for many people, and certainly for me. My attention might start to wander after 15 minutes, and it can be extra hard to regain focus after that first hour. If I hear multiple speakers at the same time or any noise in the background, it can also disrupt my attention and my ability to learn.”

Since he began taking medication in spring 2020 to help with the disorder, he said he has found new clarity and motivation, so much that he avoided telling instructors about his condition until this spring.

“It was something I wanted to prove that I could do myself, and not ask for any extra help,” Betancourt said. “It hasn’t been easy keeping my focus, including longer tests. Before Fresno State, I had heard comments from faculty about my lack of focus. And they were partially right, but it’s a little vindication that it wasn’t necessarily my fault.”

The diagnosis came at an important time, when new challenges were posed to students during the COVID-19 pandemic and campus shift to virtual instruction. Taking classes virtually while helping watch his young daughter was a challenge, while his wife worked 12-hour nursing shifts. The time period required extra study and preparation and babysitting help from his mother, sister and other family members.

Now that the campus has returned to in-person classes, he has been busy as a treasurer for the Enology Society of Fresno, a campus student group that holds weekly public wine tastings. He has also served as vice president for the campus Entrepreneurship Club, thanks to an invitation from a fellow student and former O’Neill employee.

“Getting to meet a new business person each week and learn how they’re trying to connect with the community has been invigorating,” Betancourt said. “There’s an added benefit of learning about their marketing plans and business interactions, and I enjoyed the diversity of the ideas and people who have started their own companies.”

Being able to focus on winemaking in the classroom has

pushed his career path in new directions, thanks to hands-on classes like those taught by Dr. Miguel Pedroza.

Betancourt specifically remembers a multi-month lab monitoring the phenolic composition of wines tied to astringency and bitterness in the cellar production class. He has also learned about consumer wine sensory preferences tied to an alternative yeast study by Pedroza in a wine production class. The rigors of research have been stressful at times, yet validated by the potential benefits.

“I commend him on being brave enough to come back to college after already being on a professional path and accumulating new experiences,” Pedroza said. ”He has always been a team player who has integrated well with others from different ages and experience levels. I never knew that he had any issues tied to ADHD. To me, he always had an outstanding performance as a student, and this speaks highly of his dedication to the program.”

Betancourt looks forward to a winemaking internship this summer with E. & J. Gallo.

“No matter how much experience you have, there are new challenges every day, and no blend is ever the same,” Bettancourt said. “You’re constantly managing and shaping the wine’s chemistry throughout the winemaking process.”

Just like the multi-year dedication required for designing successful wines, his extended path to graduation has been equally rewarding.

“I thought there was something wrong with me for so long, so I think it’s important to share my background, especially if others face similar issues and haven’t been tested yet,” Betancourt said. “I wasn’t diagnosed until I was 30 years old, but I’ve never stopped trying to learn, and that patience has benefitted my career and my family. I cannot put into words how grateful I am for all the help and patience from my wife, professors, fellow students, family and friends.”