‘It’s all for the people’; Juan Felipe Herrera Elementary opens in Fresno

Home » ‘It’s all for the people’; Juan Felipe Herrera Elementary opens in Fresno
Previous Next

‘It’s all for the people’; Juan Felipe Herrera Elementary opens in Fresno

On Aug. 22, dignitaries, educators, students and the community gathered at Juan Felipe Herrera Elementary School to recognize the U.S. Poet Laureate emeritus and dedicate the new school that bears his name.

“We have a poet laureate for the Valley, and this is his school,” said Dr. Robert Nelson, superintendent of the Fresno Unified School District. 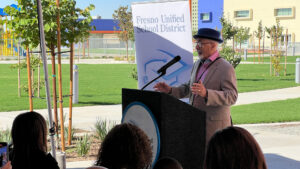 Located on Church and Willow avenues in Southeast Fresno, the grounds are visually striking, with a large orange entrance contrasted with the dark blue administrative office and the blue sky that often graces Fresno in the late summer. As visitors step into the office, they are greeted by a wall featuring a photo of Herrera and the dates of his service as the United States Poet Laureate (2015-17).

The Sunnyside High School marching band welcomed guests who mingled before the ceremony. Several dignitaries from Fresno Unified spoke about what sets this school apart from others in Fresno.

Herrera Elementary is a dual immersion school, meaning teaching and academic activities are conducted in two languages, English and Spanish. Just as the Laurette Lab he coordinates at the Fresno State Library combines art and poetry in a playful space, the elementary school engages students through hands-on STEAM (science, technology, engineering, arts and mathematics) learning. Rather than teaching subjects in isolation, learning is project-based and students are encouraged to utilize all disciplines to devise pragmatic solutions – mimicking real-life problem-solving.

During his speech, Herrera, a Fresno State professor emeritus, contrasted the STEAM approach with the difficulties he faced as a young man from Mexico going to school in the United States for the first time. He recalled being scolded for speaking Spanish and, in his unique first-person perspective, described his confusion as he navigated the hostile environment young immigrants faced.

It resulted in Herrera being a quiet child. He said it took him years to finally find his voice. Once unmuted, the creative flow from Herrera has been unstoppable.

While Herrera seemed to enjoy the moment with friends and family, he also recognized the exceptional significance of being able to participate in a school named after him – an honor even the greatest of people rarely live to see.

“I feel very grateful. I see my mother’s blessing come to fruition,” said Herrera following the ceremony. “I was like a coocoo-headed boy, always floating around going places, and my mother always praying for me. It was probably the right thing to keep me on the right road. So, I think this is an outcome of all the blessings.”

Herrera is a professor emeritus in the Department of Chicano and Latin American Studies and is currently the coordinator for the Laureate Lab Visual Wordist Studio at the Fresno State Library. Herrera Elementary School is being led by a new principal, Dr. Miguel Naranjo, who is an alumnus of Fresno State. He has been an educator for the last 25 years and received his Ed.D. from the Kremen School of Education and Human Development in 2011.

“There is nothing more beautiful than inspiring children and learning from teachers. It becomes more real and earthy,” Herrera said. “Whereas poetry is always flying. It’s the hawk that flies around, it’s hard to catch. Here it’s the real thing.”