A memorial service for Paul DeRuosi, a two-time Fresno State alumnus and former director of development for the University’s Division of Student Affairs and Enrollment Management, will be held at 10 a.m. Thursday, Feb. 16, at The Shrine of Saint Therese Catholic Church in Fresno (1410 N. Wishon Ave.) in the Tower District. 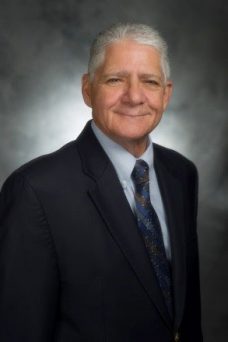 Mr. DeRuosi died Feb. 4 following a heart transplant on Jan. 29. He was 68. Fresno State President Joseph I. Castro ordered Fresno State’s national and state flags to be posted at half-staff from sunrise to sunset on Feb. 16 in honor of Mr. DeRuosi, a veteran of the U.S. Marine Corps.

A native of Fresno who graduated with a bachelor’s in criminology corrections in 1972 and a master’s in counseling in 1985, Mr. DeRuosi was a 2016 Top Dog Outstanding Alumnus award recipient. Prior to Fresno State, he worked for the Fresno County Department of Social Services, where he pioneered a project for general relief recipients that was nationally recognized.

He joined Fresno State in 1979 and retired in 2010 after serving in the Career Center as director of the University Scholarship Program and as a development officer. His work to develop a Community Service Scholarship Program has placed more than 1,200 students in career-related work experiences throughout the Fresno area, said Dr. Frank Lamas, vice president for Student Affairs and Enrollment Management at Fresno State.

“Those who had the opportunity to work with Paul enjoyed his humor and were inspired by his joyful approach to serving student success at Fresno State,” Lamas said in a message to division employees. “We honor the memory of Paul DeRuosi in serving our students and know that he made a difference in the lives of many.”

He added that Mr. DeRuosi also played an integral role in Fresno State’s most recent comprehensive campaign, which raised more than $214 million to support students, faculty, facilities and programs.

In lieu of flowers, his family asks that remembrances be made in support of Fresno State student scholarships with checks payable to Fresno State Foundation, 5244 N. Jackson Ave., KC45, Fresno, CA 93740 or online. (In the memo portion of the check and/or in an accompanying letter, the funds should be designated to be in remembrance of Paul DeRuosi). Donations in his name may also be made to UCSF’s Heart Disease Program or Donate Life California.