Fans are encouraged to cosplay as their favorite characters. The event policy is available online. Cosplay (short for “costume play”) is the practice of dressing up as a character from a movie, book, or video game.

A cosplay contest will be held Sunday afternoon with judging based on costume quality, creativity and performance. Children are welcome to compete. Signups are available on the FresCon website and will be accepted at the door.

Other notable cosplayers will attend the event as judges for the cosplay contest, including Lady Lindsey, Mathew Hernandez, Ragon Nichols and Jeanna Ranae Burdine-Slaven “Hawkgirl.”

On Saturday, Harlacher’s panel at 2:30 p.m. will focus on voice acting. She will sign autographs after the panel. On Sunday, her panel “Let’s Play Kingdom Hearts 2: Talking Games” will be at 11:30 a.m. 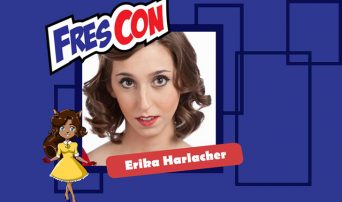 Harlacher is a Los Angeles-based voice actress and has voiced characters in popular anime shows and video games such as such as Persona 5 as Ann Takamaki and Killer Instinct as Sadira.

Cable will host a panel at 4:30 p.m. Saturday on film making called “How to Make and Market a Feature Film.”

Cable is a playwright, author, screenwriter and filmmaker. He teaches stunt classes and has given lectures to the Screen Actors Guild and Women in Film. He is the president of AAA American Entertainment.

Panels on Sunday include “The Story of Labyrinth”  at 10:30 a.m. by Chis Zimmerman and “Batman Psychology” by Kyle Villarama at 1 p.m. (See panels schedule: bit.ly/FresCon17sched).

Inspired by San Diego’s Comic-Con International, FresCon launched in 2015 as an opportunity for the community to learn about popular “geek culture.”

Gamers can put their skill to the test in video game tournaments featuring popular fighting games such as Street Fighter 5 and Super Smash Bros. 4. Free game playing will also be available.

The event will feature several vendors as well as Fresno State professors who will host panels and workshops on a variety of “geek culture” topics.