Fresno State’s eight schools and colleges, along with the Division of Student Affairs and Enrollment Management, selected nine outstanding students to honor as Undergraduate Deans’ Medalists for the class of 2018.

Each dean selected an undergraduate and graduate medalist based on academic excellence, community involvement and other achievements. Fresno State’s Graduate Deans’ Medalists will be announced this week.

At Fresno State’s 107th commencement on Saturday, May 19, one medalist from the group below will be announced as the President’s Medalist, the University’s top academic honor for an undergraduate student. 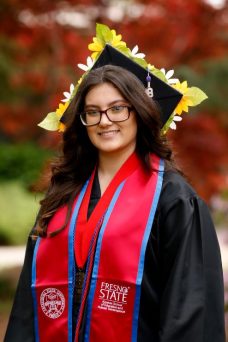 Elizabeth Barba, of Fresno, completed a B.A. in liberal studies (child development) with a minor in French with a 3.56 GPA. She was born in Mexico and immigrated to the United States with her family when she was 6 months old. She began studying French in eighth grade and is now fluent in English, Spanish and French. A first-generation university student, Barba is committed to transforming the lives of others and understanding the struggles facing many students. She has assisted students at John Burroughs Elementary in Fresno since 2016, and has been a member of Jumpstart Fresno, which emphasizes the importance of service to the community. She also assisted at Kings Canyon Head Start, tutoring children ages 3 to 5 in kindergarten readiness, and she has worked with Fresno State’s Office of Community-Based Learning. Barba is now a candidate for the Fresno Teacher Residency program, allowing graduates to earn their teaching credential and master’s degree while preparing them for a three-year commitment to teach in Fresno Unified School District. 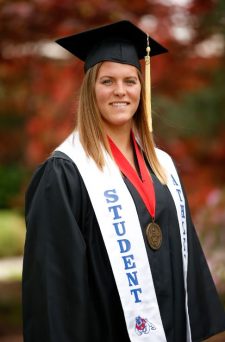 Katelin Britton, of Modesto, completed a B.S. in agricultural business with a 3.97 GPA. Raised on a small family fruit farm, Britton was drawn to agriculture at a young age and fondly remembers summers working cherry, peach and apple harvest. In between managing her classwork at Fresno State, she served as the team captain for the Bulldogs’ swimming and diving team and completed internships at Ott and Davison Consulting in Clovis, Van Groningen & Sons in Manteca and Gaarde Food Source/Pangea Cultivar Management in Fresno. She earned Academic All-Mountain West honors as a student-athlete, and volunteered for several community service projects, including the Saturday Sports program, Fresno State’s Student Cupboard food drive and Big Hero Little Hero. She considers herself fortunate to have received a college education while competing in a sport she loves with teammates who support and encourage each other. She dreams of one day taking over the family business. 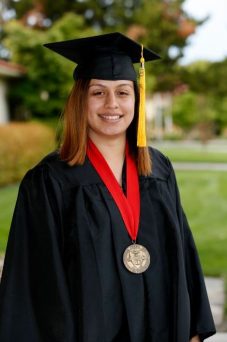 Selena Carbajal, of Fresno, completed B.A. degrees in women’s studies and psychology with a 3.97 GPA. A first-generation college graduate who is the daughter of immigrants, Carbajal says she chose more than one major because she just kept finding more interests. The Sunnyside High School alumna created a line of research that bridges each of her majors while examining the challenges and barriers of Latina, first-generation college students in higher education. As a McNair Scholar, a Sally Casanova Pre-Doctoral Scholar and a research assistant for the Latino Family Dynamics Project, Carbajal encourages others to use their diversity as an educational resource. In the fall, she will pursue a Ph.D. in family studies and human development at the University of Arizona. Her long-term goal is to build a foundation for future generations of scholars to promote and foster diverse and innovative research agendas for the benefit of individuals, communities and institutions. 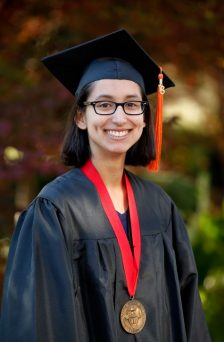 Yvette Espinoza, of Fresno, completed a B.S. in computer engineering and minors in mathematics and Chinese with a 3.83 GPA. The daughter of Mexican immigrants, Espinoza knew little English when she first began elementary school. Today, she graduates from Fresno State as a multilingual engineer who speaks English, Spanish and Mandarin. Espinoza enrolled in Mandarin course at Fresno State, and was so inspired by the language that she visited China during summer break and decided to study abroad for a semester in Shanghai. Espinoza first became interested in engineering through the MESA program. She received a scholarship to attend Fresno State through the Smittcamp Family Honors College and went on to secure two internships with Raytheon Missile Systems before accepting a full-time job offer from Northrop Grumman, a global aerospace and defense company. With interests geared toward digital signal processing, Espinoza’s research was focused on underwater mapping by using sensors to track the position of a watercraft. She is also considering graduate school.

Patricio Galindo, of Selma, completed a B.A. in social work with a 3.85 GPA. In 2009, Galindo enlisted in the U.S. Marine Corps, and in 2010 deployed to Afghanistan during Operation Enduring Freedom. His seven months there changed his life. Galindo earned eight medals while serving the country, including a Certificate of Appreciation from former Vice President Joe Biden when his unit helped handle the protection of President Barack Obama during a visit to Hawaii. He returned home in 2013 after earning the rank of sergeant, but had trouble adjusting to civilian life and suffered from PTSD and bilateral hearing loss. Still, Galindo used his GI Bill to attend Fresno City College before transferring to Fresno State. Galindo is a member of the American Legion Selma Post 12, which last year donated over $12,500 in student scholarships. He also created a resolution and presented in front of Congress to help veterans receive proper recognition. At Fresno State, he created the first social work honor society, Chi Nu, and worked to send care packages to military during the holidays. Galindo interned at Phoenix Secondary Academy, mentoring troubled students in need of guidance. He will pursue his master’s degree at Fresno State and plans to become a school social worker.

Prabhsimrat “Peekay” Gill, of Fowler, completed a B.A. in English (English education) with a 3.83 GPA. Gill’s passion for storytelling has driven her