The shopping frenzy on opening weekend of corn sales at the Rue and Gwen Gibson Farm Market can be baffling. It’s not uncommon to see hundreds of people stand in line, sometimes for hours, to grab a bag or several of the popular summer crop grown on 82 acres of the University Farm Laboratory.

Betsy Juergens, the first customer on opening day, June 8, arrived at 4:30 a.m., hours before the market opened at 7 a.m. Jackie Fladger strolled in around 8 a.m. for what she described is “sweet, delicious and juicy” white and yellow corn. She bought 24 ears.

Pat Dougherty, with three bags in hand for her two children and herself, loves the freshness. “It doesn’t sit in the store or warehouse and it is very sweet. I love it. You know you’ve got fresh-picked corn that day.”

Even Simon Majumdar, a Food Network chef, has gushed about the corn, which he tasted in the agnolotti pasta dish made by Annex Kitchen, one of several Fresno restaurants that use Fresno State corn. During a trip to Fresno last year, Majumdar told local media that the corn “is second to none.”

So, what’s the secret behind the super sweet and juicy corn?

“There’s nothing special here except maybe that it’s grown really well and that we harvest it when it’s at the peak perfection of maturity and get it to the store the very next day,” said David Sieperda, farm manager.

There’s no state-of-the-art engineering or complex science behind the pop-in-your mouth kernels, although the growing process has been refined and updated with surface drip irrigation for efficiency over the years. The yellow corn is a decade-old variety known as Vision while the white is simply No. 3274.

“People have laughed and said (the corn) must have crack in it or something special and it doesn’t,” Sieperda said. “It’s regular old sweet corn.”

A professor in 1981 had students grow corn on a few acres for a project. Corn was the professor’s favorite, Sieperda said. A year later, the corn was sold for the first time at the old farm market on the southeast corner of Chestnut and Barstow avenues. 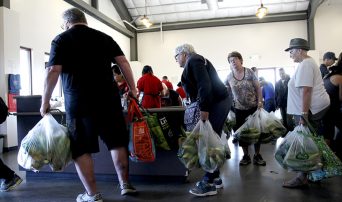 It takes 80 days for the corn to grow from seed to harvest. Special attention is given to the amount of water and nitrogen the plants receive. Agricultural students study the corn through the growing season. The entomology class looks at spider mites and other insects on the corn, Sieperda said. Students in soil and irrigation look at the dirt and water and a group even studies the weeds. Agricultural business students look at the economics of the corn business.

When it comes time to harvest, the corn is picked at dawn when it is at its coolest, Sieperda said. From there, the corn is placed in coolers and chilled overnight to 35 degrees to slow the sugar, or liquid, in the kernels from turning into starch reducing its sweetness and changing its texture. You can tell corn is starchy when it is chewy, Sieperda said.

The ability to get freshly picked corn locally with a strong flavor and sweetness is what Annex Kitchen owner Jimmy Pardini likes about Fresno State corn. He uses the yellow, because of the bright color, in his agnolotti pasta during the summer months. Pardini said he tried making the pasta in the wintertime with off-season corn but the taste wasn’t as bold. The dish will make its seasonal debut on Tuesday, June 19.

“The kernels are really nice. They’re plump,” Pardini said. “I really like the size of the kernels… you can just shave the corn and eat it. You don’t even need to do anything with it and it’s really good. There’s so many ways to prepare it. The kernels are fantastic.”

Supporting Fresno State is a plus, Pardini said. People want to know when the corn agnolotti will be on the menu every year because it’s a unique dish pairing two ingredients that don’t normally go together and “because it’s a dish that supports the community,” he said.

In 2017, 800,000 ears of corn total were sold. Proceeds help support the market, students and the businesses that develop store products. In a few weeks, the University’s Food Processing Lab will use corn kernels in a salsa that will be sold at the market.