Fresno State President Joseph I. Castro surprised Rep. Jim Costa in a Zoom meeting on Dec. 21 to present the longtime lawmaker with the President’s Medal of Distinction.

“As one of my final acts as Fresno State president, it is my great honor to recognize Jim for his bold leadership, more than 40 years of public service and commitment to the greater good of our Valley and Fresno State,” Castro said. 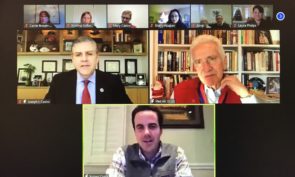 “He and I share a last name, but he has always treated me as a friend, like a family member,” the journalist said. “When I first went to California to visit Fresno State, what makes it special? It’s a place where people are very real, where they are of the earth. And that’s really kind of the spirit of Fresno, and it’s the spirit of Jim Costa — of the earth. He really cares.”

Costa earned a bachelor’s degree in political science from Fresno State. He is a member of Fresno State’s Portuguese Advisory Board and the board of directors for the Maddy Institute, a public policy institute established by Fresno State in 1999.

“Our University has exemplified what is the best and the goodness,” Congressman Costa said. “I think there’s so much about growing up in this Valley, that you [President Castro] did as the son of an immigrant, and myself as a grandson of immigrants. After all, that’s what our nation is all about. It’s immigrants past and immigrants present. That’s what makes this country great. For 245 years, we’ve been a beacon of light because there’s opportunities to make a difference.”

“This is so touching,” the congressman said. “This is the best Christmas gift I could have had.”

A lifelong resident of the Valley, Costa represents California’s 16th Congressional District, where he has served since 2005. Before being elected to the U.S. House of Representatives, Costa served for 24 years in the California State Legislature, in both the Assembly and the state Senate.

“Congressman Costa is a proud Bulldog alumnus who’s been a tireless advocate for Fresno State and our students at both the state and federal level,” said Larry Salinas, executive director of government relations for Fresno State. “It has been a pleasure to work with him and his talented staff. I am delighted to see this recognition for his service.”