Digital journalism major writes his own story on path to graduation

Digital journalism major writes his own story on path to graduation

Digital journalism major Jesús Cano, who is set to graduate in May 2022, landed a job with the Bay Area News Group. (Photo by Cary Edmondson)

Jesús Cano considered a career in teaching, but when he discovered journalism — specifically sports writing  — he was hooked.

Cano was 16 when his byline first appeared in The Mercury News for a story he wrote about a Pittsburg High School football game. He would go on to have contributing bylines in the East Bay Times as a teen too.

“That was the newspaper I grew up reading,” said Cano, who was born in Pachuca, Mexico but grew up in Pittsburg, a city in the East Bay. “When I would go on BART, to an A’s game, I would sometimes read it on the way there. I’ve always been fascinated with it.”

Seeing his name printed in a large publication solidified his goal to become a beat reporter for the San Francisco Giants or Oakland A’s. The opportunities and connections he’s made so far helped pave a path to a part-time sports editorial clerk job with The Mercury News since January 2021.

“If you can make some money writing about sports and going to games, then that’s what I want to do,” Cano said.

In May, the digital journalism major and managing editor of The Collegian student newspaper will graduate from Fresno State. The accomplishment is both exciting and bittersweet for the first-generation college student who left Mexico at 10 months old with his mother and grandmother to join his father in the United States.

“The fact that Jesús is graduating is my greatest pride,” said Leticia Hernandez, Cano’s mother. “He will be the first to graduate from college in my family. I see all his achievements, and I think that the sacrifice to come here was worth it. I have no words to describe how much happiness I feel when I see him realize his dreams.”

Cano is a recipient of the Deferred Action for Childhood Arrivals program, also known as DACA. His father, Aaron, spent more than a decade in the U.S. working as a floor installer before he was deported to Mexico in 2016. They haven’t seen each other since the chaotic morning U.S. Immigration and Customs Enforcement personnel showed up at their house to take his dad.

That year was tough, Cano said, but he was determined not to let it affect his schooling or stop him from pursuing journalism. Cano developed an interest in writing about sports in high school. A mentor helped teach him what a lede (journalism lingo for the lead paragraph of a story) is and what building rapport meant, Cano said. He started writing about his own high school’s sports, then expanded to cover the entire league for the Northern California online publication called Prep 2 Prep, which helps aspiring high school sports writers get experience and get published.

Nate Smith was the website’s content manager when Cano was hired. The high school that Cano attended didn’t have a journalism department so “he was very raw in his writing at the time, but knowledgeable about certain sports…he was very eager to work a lot and very eager to see a lot of progress and make an impact in what he was doing,” Smith said.

Cano graduated from high school and went on to Los Medanos College where he was sports editor for the campus newspaper. He contributed to Delta Sports Magazine and found more opportunities to cover high school sports and publish in the large Bay Area newspapers.

He took a gap year during the pandemic, then transferred to Fresno State. Cano first visited the University on a band field trip when he was 13. His dad was a chaperone. It was Cano’s first trip outside of Pittsburg and his first time staying in a hotel.

“The weather was nice. The sunset was nice. The vibe felt right,” Cano said. “There was something about [Fresno State] that attracted me.” 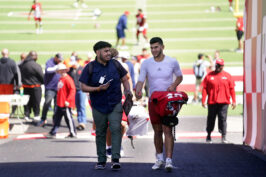 Fresno State sports, the atmosphere of Bulldog Stadium with athletes like Derek Carr and Davante Adams who starred for the football team at that time, and the support of the Red Wave caught Cano’s attention. Then a few years later, he came back to visit a friend who was a student — went to a softball game, played some games at Bulldog Bowl, had some Fresno tacos and he said he knew Fresno State was where he wanted to finish his college degree.

Cano became a student reporter for The Collegian, then sports editor and is now the managing editor. Working at the school newspaper saved his journalism career, he said. There was a time, during the pandemic, where Cano said he felt no ambition or drive to do anything. But his work at The Collegian and the collaborative atmosphere with other student reporters motivated him to help them develop and to help improve the newspaper from week to week.

“Over the years, he went from Pittsburg to Los Medanos and Fresno State, and he made it clear that he wasn’t done and wasn’t going to fizzle out because he struggled in the beginning,” Smith said. “I gained respect and admiration for how much he worked … He’s extended family for us. My kids are very close to him now so we’re all very proud of him for what he’s been able to accomplish.”

Cano plans to return home after graduation and to The Mercury News job that is helping him get a foot in the door. As a clerk, he helps with schedules, box scores and reporting.

“I’m happy for myself, but also happy for my mom, my dad, my sister, my grandmother,” Cano said. “Everyone has personal struggles. You can’t let the bad things in life determine your life. If I were to quit, I would have lived my life thinking I didn’t make the effort to do this stuff. I’m happy I was able to make my mom and dad’s dream come true.”

Celebrating the Class of 2022
In the coming weeks, FresnoStateNews.com will highlight stories of inspiring students who will be graduating this spring. Commencement ceremonies for the University’s eight colleges and schools along with several affinity celebrations will take place May 20 through 22. Visit commencement.fresnostate.edu for more details.

By BoNhia Lee|April 21st, 2022|Categories: ACADEMICS, ALUMNI, PRESS RELEASES|Tags: College of Arts and Humanities, Commencement, Department of Media Communications and Journalism|Comments Off on Digital journalism major writes his own story on path to graduation