Steven Hensley and Audia Dixon were awarded Fresno State’s top academic honors for the class of 2022.

Chosen from a group of nine Undergraduate Deans’ Medalists and nine Graduate Deans’  Medalists, they were surprised with the honor during the President’s Recognition Reception on Thursday, May 19.

“Steven and Audia show true passion for academic achievement and excellence along with a reflective approach that has guided them through their Fresno State careers, beyond the classroom and into the community,” said Fresno State President Saúl Jiménez-Sandoval. “These two students exemplify the best of Fresno State: Leaders who create, in order to better our community and deepen our understanding of the humanity that unites us.”

Both students will be recognized at the College of Arts and Humanities commencement ceremony at 12:30 p.m. on Friday, May 20, at the Save Mart Center.

Hensley, of Merced, was selected as the President’s Undergraduate Medalist, the University’s top honor for an undergraduate student. He earned bachelor’s degrees in philosophy, pre-law option, and political science with a 4.0 GPA, and wrote two respective honors projects for his majors.

Dixon, of Fresno, was selected as the President’s Graduate Medalist, Fresno State’s top honor for a graduate student. She earned a master’s degree in art with a 4.0 GPA, and has been an instrumental artist in the community for many years. 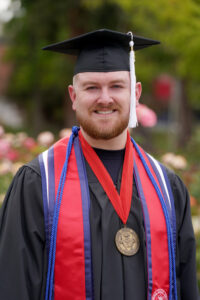 Incarcerated at age 17, Hensley earned college credit while in prison and saw a flyer for Fresno State’s Project Rebound, a program to help formerly incarcerated individuals earn their degrees, which gave him the confidence he needed to apply and earn his degree.

Once at Fresno State, he became a student coordinator for Bulldogs for Recovery, a Student Health and Counseling Center program concerned with recovery from addiction; co-founded Youngsters for a Change, a nonprofit to help at-risk and formerly incarcerated youth; and serves as co-chair of the Fresno County chapter of the American Civil Liberties Union.

He was recently elected to serve a three-year term on the board of directors for the ACLU of Northern California. Hensley wants to help incarcerated youth, those in the LGBTQ community and those who grew up in poverty. He will attend the University of California, Berkeley, School of Law in August. 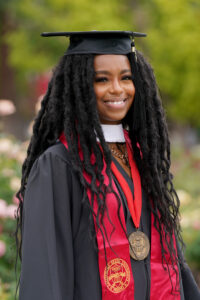 Originally a liberal arts major, Dixon changed to art and called it the best move she could have made. Dixon was inspired by Black contemporary artists and motivated by the late professor Paulette Fleming to express her own view on Black identity.

At Fresno State, Dixon designed African American Commencement Ceremony program covers and posters, and collaborated on mural projects that promoted Black empowerment. Her first mural project was the “Lift Every Voice Mural Tour” organized by Dulce Upfront, a multimedia arts collective, in response to the George Floyd protests. She was then asked to design another mural created by Black women artists in the Central Valley.

She plans to continue working as an artist and plans to teach art. Her goals include finding a residency for research and applying to a Master’s of Fine Arts program.