Through a megaphone on the pool deck of the Fresno State Aquatics Center, head swim and dive coach Jeanne Fleck encourages young backstrokers to “reach for the sky.”

It’s good advice, said Darina Khisiamova, a former Fresno State swimmer and one of several swim coaches on the pool deck this week who, like Fleck, cares a great deal about teaching children to swim. “My favorite thing is helping them get better,” she said. “I can see that they can be really good swimmers in the future.” 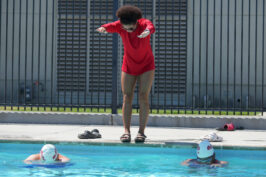 Khisiamova, a native of Moscow, Russia and recent Fresno State graduate, is working as part of a community partnership between Fresno State athletics and the Fresno Unified School District. Throughout June and July, Fresno Unified students have been afforded the opportunity to participate in summer enrichment programs at no cost to their families.

Fresno State coaches and athletes like Khisiamova have shared their expertise at camps in basketball, volleyball, softball, track and field, and swimming and diving. Camps for young engineers and esports enthusiasts were also offered as part of the Fresno Unified partnership, which includes the Fresno Chaffee Zoo, Break the Barriers and the Fresno Discovery Center, among over a dozen others.

Because so many children during the Fresno summers spend time in and around the water, the swim camp is one of the most popular. Khisiamova, who as a junior was the Mountain West Conference champion in the 1650 free and owns the Bulldogs record in the 400 individual medley.

“It has been quite a journey,” Khisiamova said of her time swimming at Fresno State. “I have always been very competitive.”

According to Fleck, Khisiamova has had to tap into that competitive spirit just to remain in the United States after her graduation. “She has worked very hard to support herself,” Fleck said. “She has had to give swimming lessons to make enough money to survive.”

Khisiamova has often ridden her scooter or taken an Uber to participants’ homes since she doesn’t have a car, which she hopes to have enough money for in August. She has also worked at Hoover High School as a club swim coach, and just recently secured a position as an instructor with Orangetheory Fitness, part of her Optional Practical Training , a year-long work authorization available to F-1 international students who have been full-time students for at least two consecutive semesters and plan to seek employment in the United States in their fields of study.

“I want to pursue my career in strength conditioning coaching,” Khisiamova said. “I’m planning on graduate school at Fresno State in exercise science.”

For now, the would-be graduate student has continued to grind and teach young swimmers, and she has gotten very close to her Fresno State family during this time of war and upheaval in her home country. Friends and teammates – especially Ukrainian diver Yuliya Tykha – have checked in with her regularly to “make sure [she’s] doing all right.” 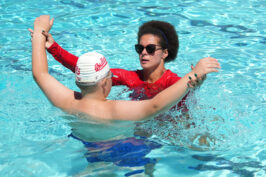 As a junior, Darina Khisiamova was the Mountain West champion in the 1650 free and owns the Bulldogs record in the 400 individual medley. (Photos by Cary Edmondson)

“We reach out to each other,” Khisiamova said of Tykha. “When this whole thing started happening, we were talking and we were supporting each other every day.”

Ultimately, Khisiamova said she wants to earn her citizenship and remain in the U.S. for good. She also hopes to one day bring her family here. “It’s been hard,” she said of being so far away from her parents, whom she stays in touch with via text, What’sApp and FaceTime, since all social media out of Russia has been cut off.

Some days, Khisiamova will tell you, her dreams seem a long way off. But she is committed to them, reminding herself often as she coaches young swimmers just how important it is to move forward and, in the words of her coach, to “reach, reach, reach for the sky.”