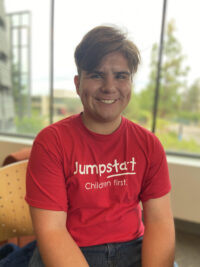 “I didn’t do much [volunteering] in high school,” he said. “I was too focused on my GPA and making sure I got into college.”

Now that Mendez, 21, is at Fresno State, he has used his volunteer experiences to help define his educational and professional goals. When he arrived as a freshman, he wanted to be a chemist, but “something didn’t feel quite right,” he said. Today, Mendez has his sights set on becoming a teacher in the early primary grades.

He came to this realization after he joined the Jump Start program in fall 2020. Despite the pandemic-imposed virtual nature of the work, he immediately felt connected to a community.

“Even though I was working from home, we [the team members] were making silly videos for children on reading, writing, and dramatic play,” he said. “It was fun! It helped me feel really engaged.”

Jump Start’s mission, Mendez said, is to teach social-emotional skills to preschool children and help them prepare for kindergarten.

“Jump Start is a ‘jump start’ to their success,” he said.

Mendez became a team leader in his second year with Jump Start so he could learn to manage a classroom and explore other volunteer experiences. Through Fresno State’s Jan and Bud Richter Center for Community Engagement and Service-Learning, he participated in the Alternative Spring Break program at Stone Soup, which gave him hands-on experiences in teaching and engaging elementary students. He has also volunteered at Fresno City College’s AsianFest and at Fresno State’s Vintage Days, where he oversaw activities in the Kids’ Zone.

“With 13 years of over 1 million hours of volunteer work and service-learning annually, Fresno State proves again that it is a community-invested University that infuses every facet of Valley life with excellence and hope,” said University President Saúl Jiménez-Sandoval. “The Richter Center continues to lead nationally in supporting concrete experiences that both promote academic excellence and deeply impact our communities with the vitality and creativity of our students.”

Data collected for the annual Service Impact on the Community Report by the Richter Center documents a total of 1.34 million hours of service. The total economic impact of that service is estimated to be $48.3 million, based on calculations from the Independent Sector, a national nonpartisan network of nonprofit and philanthropic organizations and professionals.

Mendez, a Selma-native, knows that getting involved on campus and in the community can be a challenge for many students like him who commute to campus. “It can be tough to find a community,” he said. He joined the Fresno State bowling team as a freshman, and though it was a great experience, he has since found his true calling by doing volunteer work. He encourages other students to do the same.

“Once you set foot in the door of the volunteer world,” he said, “you’ll see how exciting and fun it can be. You get to meet so many people and it can really impact how you do college.”